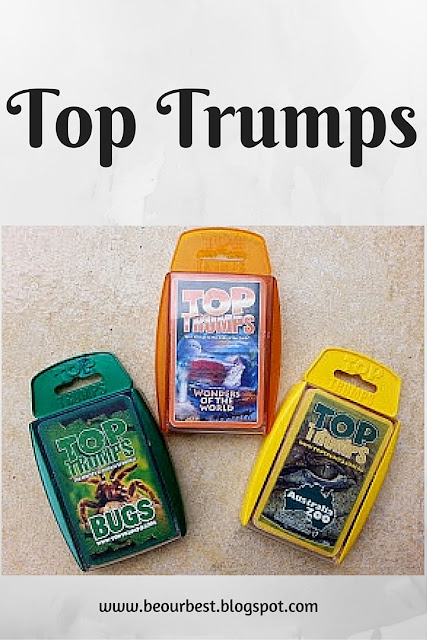 Growing up in the 70s and 80s in the UK, Top Trumps was a popular game.  Mostly with boys, but having a brother, I got to play it lots.  We had a version of army vehicles - from Jeeps to Harrier Jump Jets and everything in between.
It's a simple enough game - you have a pack of cards with facts on each one, and you play them off against each other to see which card 'trumps' the other.  For example you may pick 'speed' as the fact to play on - and your car may go a maximum 280km/hr -but unfortunately your opponent's card is a plane that can travel at 900km/hr so the plane trumps the car and that player gets to keep both cards, and choose what 'fact' to play on next.
I used to love playing this game - and I remember there were the really good cards that you always hoped you would get, as they could beat pretty much anything.

Last year I found this game again and bought it for our girls for Christmas.
Apparently Top Trumps were relaunched by a new company that had bought the rights about 12 years ago, and there are now all kinds of versions of the card game, and also online versions and computer game versions!

The one I found was from Australia Zoo, and has a lot of animals from the zoo on the cards.
The girls LOVE it! 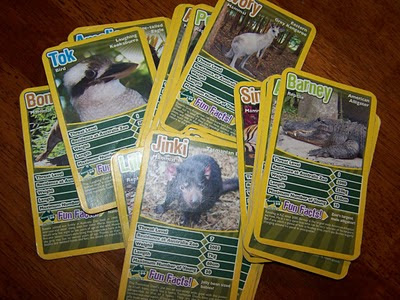 They have played endless times, and through this have learnt lots too!  The facts given are weight, length, maximum number of young, year they came to the zoo, and threat level.  So the girls have learnt how to read all those values - years, and measurements, and get endless practice comparing numbers - large and small.  Each card also has some information about the animals on them, so they can also learn some interesting facts.

Of course they have their favourites - which are the strong, long and prolific breeding animals!

Like Agro here, who with a weight of 600kg is tough to beat! 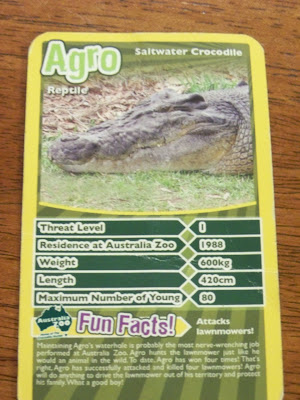 Then there's Casper, who can lay up to 80 eggs at once!  More than most animals ! 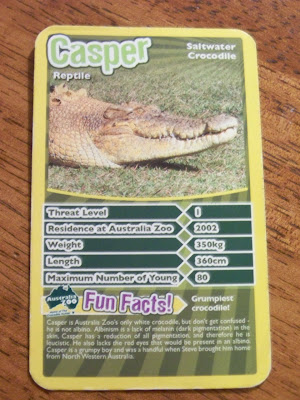 Not to mention Lilly, who is 680 cm long - which I think beats them all in that category! 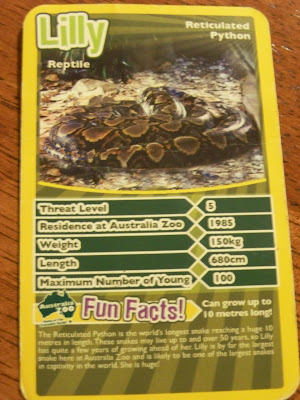 For such a simple game, it provides great entertainment for the kids - at any time, any place, and they can play for 2 minutes or 20 minutes.
While they are playing, they are reading, practicing their numeracy skills, working their memories, learning animal facts, and also getting better each time at the whole winning-losing business.

There are many different packs out there now - brand names to match the latest toys - but also ones about animals, the wonders of the world and sports - a great way to introduce your kids to some general knowledge facts in a fun way.
For a small and simple game, to work literacy, numeracy, memory, and general knowledge all in one is pretty special!

The official website has all the cards available there.

Have you ever played Top Trumps? What version did you have as a kid? or do you have now?