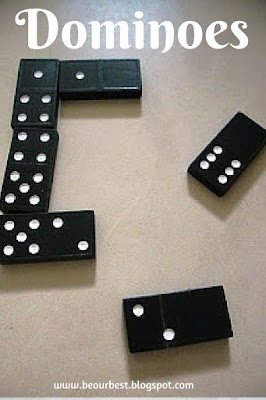 After school today, our girls got out a box of dominoes each to play with.  I never know what might spark their interest at any time. They just went to the games cupboard and that's what they came out with today. 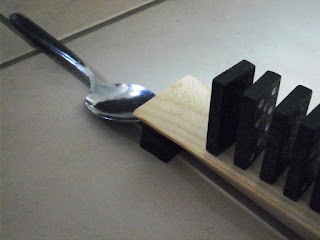 They didn't then play an actual game of dominoes - but used them to set up 'domino runs'. These developed to include spoons and balls!

It's great to see them using their imaginations and creativity to construct these things.  Perhaps inspired by science experiments at school - or just kids boundless creativity and exploratory play.  It's great for their hand-eye co-ordination, problem solving and also patience.  Amazing how much you can get out of a few small blocks!

Of course I had to look up Dominoes online to get some background information.  I discovered that Dominoes is believed to have originated in China in the 12th Century - and the number combinations are taken from those numbers found on 2 dice!  The game then gradually spread around the world, and has been and is popular in many cultures.  The more complicated tile game Ma Jong developed from the basic Chinese dominoes game. 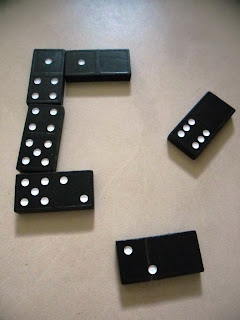 To play the actual game of dominoes, you share out the tiles face down on the table amongst the players, and then take it in turns to place them down - matching the same numbers together until no more tiles can be placed. The winner is then the one whose dots on their remaining tiles add up to the lowest value!
It's a nice simple game with easy numbers so even young children can play.

Of course there are the inevitable online versions of dominoes, and I even found an app for your phone to play domino rally!

Do you ever play dominoes?  Do your kids?

I'll leave you with a video of a domino rally - an impressive number - just a little more than my girls games this afternoon!!