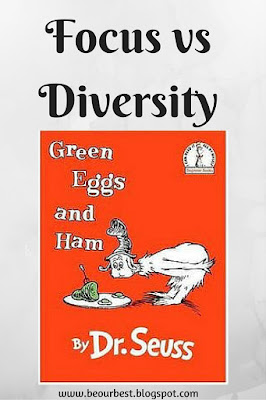 One of my favourite kids books is Dr Seuss's 'Green Eggs and Ham'.

When our girls were younger, I used to read it to them a lot,enjoying the rhythm and fun of the words, but also the idea in the story of giving something new a try.

I even gave the girls green eggs and ham to eat a couple of times (green food colouring in scrambled eggs). They loved it when we put the lights out while we were eating, "would you, could you in the dark?"

Our girls are pretty good at trying new foods now - but it's not just foods that kids, and indeed adults should try something new in.  I believe it's important to try all kinds of new things - new places to visit, new and different ways to do routine things,  make new friends, try new activities.  After all, 'variety is the spice of life'.

We do try to encourage our girls to try new things at school. Especially at a young age, it's important to give things a try, to see where your interests lie.  Sometimes it's daunting to try something new when you've no idea how to play the game, or throw the ball, and perhaps none of your friends are trying it out.  It takes courage to put yourself out there and try, not being afraid or embarrassed to not be able to do something first time.
For kids particularly to try several different activities, sports, foods etc can help develop a wide base of skills and knowledge that will help them in their growth and development in future years.  Every experience as a child helps to open up new pathways in the brain making further study and efforts as they get older an easier process.

On the other hand, we also try to encourage our girls to stick at things.  When they do try something, we want them to give it a good go, not just try once and walk away.  I remember reading when they were very young, that sometimes it takes 10 tries of feeding babies and kids foods before they will eat them.   Again, not just with food, I think persistence is important. For example they may try a ball sport, and not be able to throw or kick the ball well on their first attempt.  We don't want them to just give up, we want them to try and try again - to learn a new skill, and gain that sense of satisfaction of doing something new, that boost in confidence that comes from mastering something new.

Once again it's all about finding a balance.  Trying new things, but also sticking at things to grow and develop a skill and love for something.  How long kids should try things for will depend on their enjoyment and ability, and also on rewards and motivation.  Our youngest daughter tried rock and roll dancing for one term a couple of years ago. She loved it and was good at it. However, after one term, she didn't want to continue - wanting instead to try a different kind of dance at another school.  This dancing both our girls did for a year.  A big motivation for sticking it out for the full year, was that if they did, they would get a trophy at the end of it, which they did, after which they were happy to move on to something else the next year.

With our kids, our younger daughter is the adventurous one who always wants to try something new.  Perhaps this comes from being the younger sibling and always watching her older sister and family friends doing things when she was too young to join in.  She wants to try everything she sees!
Our elder daughter on the other hand, is more one to find something she likes and stick to it.   She does have a clear love for one sport above others - swimming.   I wonder if she will reach a stage or age where she doesn't want the variety of other sports and wants to focus on just one.  I suppose this is a natural progression for kids to find and pursue their interests.  But is there an age when they are too young to be so focussed?

I have often wondered if the child who is obsessed by trains at a young age for example - grows up to be a train driver, or at least work in the train industry.  I never had that kind of lasting and consuming interest as a child, and as an adult, haven't had a focussed career either. As a child,  I went through several different ideas of what I wanted to 'be' when I grew up.   So far, our girls are the same - they've gone from wanting to be fairies, to vets to artists and who knows what else will catch their interest over the years.

My view is that we as parents should encourage our children to see and experience as much variety as they can, but also to encourage and foster particular interests they show. If they love something enough to want to focus solely on that then we should support that too.

Do you encourage your children to try new activities and sports?  If they show an aptitude and enjoyment for something, do you encourage them further or even push them a little to continue in this activity, or do you think it's more important to try lots of different things, rather than become focussed on one particular thing at a young age?