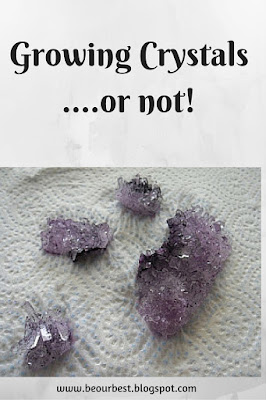 A while ago I decided to try an experiment with the girls to grow Rock Candy or Crystals.  I found several sets of instructions online and we went ahead and made our sugar solution, added colour, cooled it and put it in a jar with a pipe cleaner suspended in it for the sugar crystals to grow on. 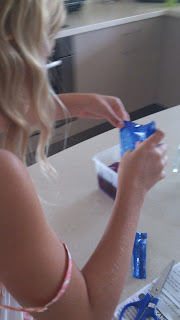 Unfortunately it didn't work! We had some tiny crystals form but nothing like those in the pictures with the instructions.

Then for Christmas, our eldest daughter got a boxed kit to grow crystals with.

She carefully followed the instructions and then patiently waited for the crystals to grow. 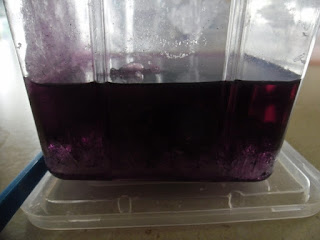 Unfortunately again the experiment did not produce great results: 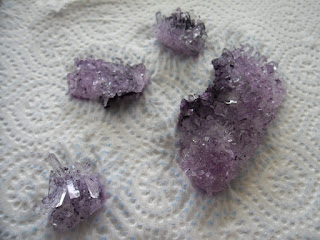 I've since read that in humid conditions crystals won't grow as well because the liquid remains warm and won't give up the dissolved sugar (or other part) which would normally form the crystals!

Living in the tropics - it is very humid - and likely to stay this way for some time.  Perhaps we'll have to come back to this experiment again in winter (July / August) when the humidity levels are much lower!

Still - the point of science experiments is to find out what happens - and we've learnt something from this result!
Often the best experiments are those that don't produce the results you expect - there is more to learn from that as you begin to consider why!!

Hopefully later in the year we'll have more success growing some bigger crystals!

Have you ever grown your own crystals?

Email ThisBlogThis!Share to TwitterShare to FacebookShare to Pinterest
Labels: science