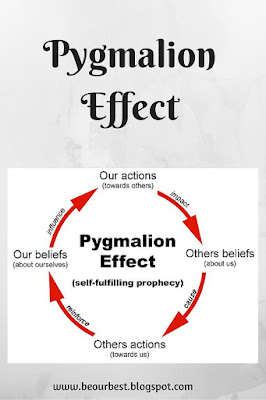 How one teacher gave and another took away


Both our daughters had swimming lessons from when they were babies.  Initially I went in the pool with them - holding them and moving them about the water. As they grew, they gradually began to swim by themselves until they reached the stage that I began to sit on the side and watch as they swam to and from the instructor.


Their first instructor was a very boisterous lady who was fabulous with the kids.  Our eldest daughter would stand on the side of the pool with this instructor standing in the water half- way across the pool. She would then fling her self into the water and swim to the instructor - full of confidence in herself and her ability to swim.


Then, when she moved up a level and had a different instructor, her confidence faltered.  The new instructor hovered close to the kids - catching them as they jumped into the water rather than letting them jump and start to swim by themselves.  During the first couple of lessons, when the new instructor, stood right by our daughter and  held her as she swam, our daughter lost the confidence in her ability to swim.  Fortunately we managed to speak to the instructors and have this issue effectively dealt with.  However - it did demonstrate very clearly, the effect of a teacher's expectations and beliefs on a child's ability.


I later came to know that this was an example of the Pygmalion effect.

The Pygmalion effect, or Rosenthal effect, is the phenomenon in which the greater the expectation placed upon people, often children or students and employees, the better they perform. The effect is named after Pygmalion, a play by George Bernard Shaw. (Source - Wikipedia) 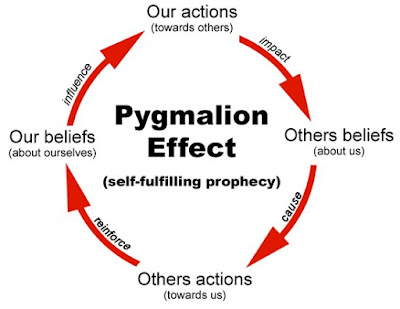 A study was carried out in a primary school to demonstrate this effect in the 1960s,  Teachers were told that certain of their students were academically gifted. (In fact these children showed no more aptitude than their class mates, and were chosen at random.)  At the beginning and end of the study, the children's IQ was measured.  The most significant gains by the end of the study were made in those students who the teachers had been told were gifted, and so the teachers had placed higher expectations on.

Teachers belief in their students

The idea is that teachers give more attention and more work to those students who they expect to do well.  We've all seen in class - our own or our kids'. The students who know the answer to the first question will put up their hand to give the answer. Getting chosen to speak and getting the answer correct boosts their confidence so that for the next question, they are even more willing to put up their hand.  The teacher becomes aware of this student's demonstrated knowledge and soon becomes to expect this student to produce good work and do well in class.

Equally, a student who is shy and unsure of the answers may sit quietly at the back of the classroom and go unnoticed by the teacher.  The longer they sit in silence, the more the impression of a quiet student is reinforced.  Some teachers may deliberately try to draw out students like this, but others may leave them and concentrate their efforts on the more vocal members of the class, to keep the class lively.

The all important first impression

It is often difficult to change someone's initial impression of someone.  We have a tendency to judge people on how they act and behave when we first meet them. Teacher's expectations of their students are also often based on the first few lessons - or even on reports from previous teachers.

Thinking of this 'first impression' mentality, I am always happy when a new school year comes around and our girls get new teachers. Another chance to make that all important first impression.  Each year their confidence grows a little and they become more comfortable in their increasingly familiar school environment and with their school friends.


Over the years I have had several comments from the girls various teachers and also heard similar stories from other parents - showing that teachers do or don't give certain students tasks based on what the teachers expect they can or can't do. For example, a teacher a couple of years ago told me they did not bother asking my daughter if she wanted to enter a speech contest as she knew she got nervous with that type of thing.  This same daughter has now blossomed into a very good speech maker after being given the opportunity by other teacher to TRY! Thank goodness some teachers give kids the opportunites to get over their fears and worries rather than be limited by them.


Attention is given to those students who stand out - who have abilities and are confident enough to display them use them.   However, it is equally important to give all students - particularly younger ones the opportunities to try things, to encourage them to give things a go, even when they are shy and nervous.  They may find they do have a talent or ability that they did not know to shout out about - or hadn't the confidence to demonstrate it by themselves.

The most important thing is that a teacher has confidence in a student.  As parents we can have all the confidence in our child's abilities -and tell them so day after day. However - the effect of a TEACHER telling a child the same thing, often inspires more self-confidence.


Do you have confidence in your child's abilities. Do their teachers?