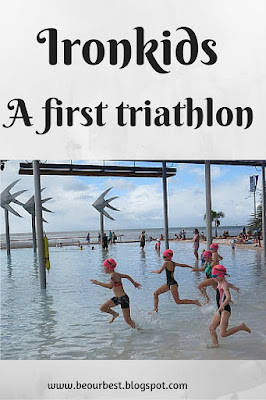 This year our girls took part in the local Ironkids triathlon for the second time.

Here in Cairns each year we have an adventure festival which features an international Ironman competition. There are also lots of smaller events for all ages and levels to join in - one of which is this kids triathlon. 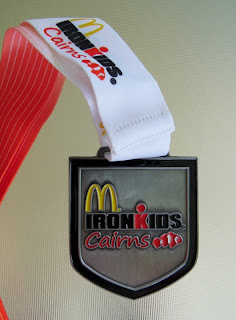 Kids aged 7 to 13 can join in and do a short swim, bike and run - finishing by running down the official Ironman finishers chute and receiving an impressive looking medal.

Our girls were in the younger age group, so swam 50m - in the lagoon, which is very shallow and the kids could have almost walked the whole way, and there were also lifeguards there to assist if need be. Then they biked 1km up and down the esplanade, and finally ran 500m.


It was set up like a proper triathlon, with their bikes 'racked' in transition with helmets, trainers and shorts set up ready to put on after the swim, and plenty of officials all along the route to help the kids if need be.


Our girls loved this event last year and again just as much this year. It's non competitive, they set the kids off in groups of about 7, it's not timed and you can see on the faces of every kid that does it how much fun they have.


Some parents and kids were nervous before their first time, thinking maybe it would be too hard or far for the kids to manage, but afterwards nobody had any such reservations.


If you think back to what you were doing yourself at that age, when just playing.  I know my friends and I were biking and running around the local area - far more than those distances. We also used to go swimming lots at the local pool and in lakes or the sea on holidays. So this triathlon is certainly not too much to expect from kids this age.


I think it's a great opportunity for kids to try out a sport in a fun environment - and the atmosphere makes for a very exciting day for all!


Have your kids ever participated in a large sporting event like this - perhaps a short fun run?  Do you think it's a good thing for young kids to do?