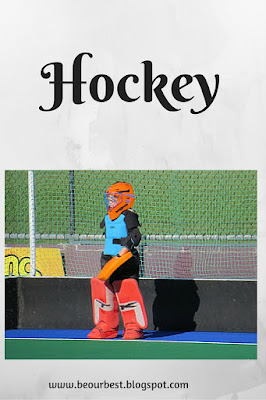 This year, both our girls took up hockey as one of their after school activities.

They had both tried it out and really enjoyed it at a boot camp they attended at the beginning of the year.

Although they are 2 years apart in age, and are on different teams, they have both ended up training and joining in with the other's team in some way. Our youngest 'plays up' with the older team, and our eldest joins in the younger kids training sessions, then helps the manager organise the substitutes and practises with the players off the turf during the younger team's matches.  So we now have 4 days a week of hockey (2 training sessions, and 2 matches). Plus, every spare moment the girls get at home they are out in the garden with their sticks and balls practising!

Why Hockey is a good sport to be involved in.

Both girls have been swimming for a long time now, training and racing but hockey is the first 'team' sport our girls have become involved in. This is something we, as parents wanted to encourage to help build those skills of working with, and relying on others.

It's great that they have found a sport that they are enjoying so much and it has the added bonus that several of their friends play it too! Hockey is a very well organised sport here in Cairns, with a great network of coaches and players of all ages and levels, so if they choose to continue after this, their first season, there is a well great community for them to join, with structured training and well marked pathways to move forward in the sport.


For all the positives about hockey, I do have to admit that the risk of injury worries me. The experience of buying and moulding mouth guards with the girls was a new one!  And helping them get padded up to play goalie too.  They've never needed any protective clothing for swimming!!

For me watching and supporting the girls in hockey is a learning curve. As I've helped out managing the younger team occasionally, I've had to learn the positions and try to understand the game a little!  I did play hockey as part of my school sports as a kid, but never enjoyed it. (I used to run up and down the side of the field avoiding the ball! I preferred netball and volleyball.)

As the girls learn the positions and rules of hockey, we can see their understanding of other team sports we watch has improved too.

Since this is their first season, they are learning something new every week, so this is helping to keep them interested and keen. That, together with the fact that they are playing with their friends means that it's a sport they are going to continue with for a while I'm sure.

I'd better keep watching and learning myself, so I can share in and enjoy their post match discussions over dinner!


What team sports do your kids play?  Did you play the same sport as a kid?