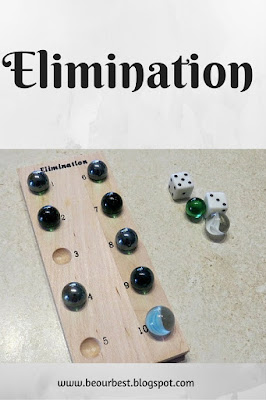 During a spring clean of our cupboards in last week's school holidays, I found a few games that we have never played before.


So I decided that we should get them out and give them a go.


Yesterday my younger daughter and I played 'Elimination'.


This game is very simple. The board has 10 numbered grooves with a marble to sit in each one.  You then roll 2 dice and can remove the marbles from the corresponding numbers on the dice. Either the individual numbers or the sum of the two.  So for example in the picture above, I removed the 5 and 3 marbles, but could have removed the 8 marble instead.


You then simply take turns rolling the dice and removing the marbles. The person who removes the last marble wins!

For younger kids it would be a fun game for number recognition and adding two single digit numbers together.


We just enjoyed it as a fun, simple game!

Do you have any games in your cupboard that you never, or hardly ever play?

Email ThisBlogThis!Share to TwitterShare to FacebookShare to Pinterest
Labels: games