Teaching your kid to be an individual 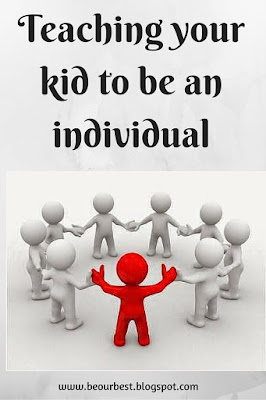 
Yesterday, I watched a snippet of video of an Australian newsreader, nominated for the ALS ice-bucket challenge, politely declining to do it.  He did so by explaining his reasoning behind his decision. You can watch that video here.  This video provoked a huge reaction in the comments - both positive and negative.  Personally, I think he explained his reasoning very well. The ice-bucket challenge has raised awareness of the disease ALS and has also raised a large amount of money. Celebrities, friends, acquaintances, everyone seems to be getting involved but I admire this newsreader for his courage to stand up and be an individual; not just follow along, even though the movement in favour of the challenge is huge. Everyone has the right to their own opinions and choices.


This video, together with a couple of other things I read and saw recently, made me think about peer pressure, and how to teach our kids to stand up for what they believe in, no matter what everyone else around them is doing.


"The nail that sticks up gets hammered down."


Have you heard this expression, also known as "the tall poppy syndrome"? These expressions show the importance of 'fitting in'. Which let's admit, most of us want to do.

We learn what is and isn't acceptable within society or a group and we conform to a large extent in order to be accepted.

When peer pressure and conforming is good

Sometimes, peer pressure can be a good thing. It can help us overcome fears, perhaps try new things that we wouldn't otherwise try.  It can give us the courage to do things that may be difficult.

For example, at my girls' school assembly this week, they showed a video of an actor pretending to be injured in the street. The video showed just how many people ignored the man, despite his calls for help. Individuals were reluctant to help. However, once one person decided to see if the man was ok, more people joined in, trying to be of assistance.  The idea was to show that it's often easier to do things when we work together - safety in numbers so to speak. Everyone likes to be part of the group. Most people don't want to be the one to stand out and do something different.


But - what if we didn't have those few people who make the first move, initiate the movements?


How do we teach our kids when it's important to stand out and be different?


To put it simply, I think we need to instil values and beliefs in our children at a young age, and the importance of staying true to these values.

How do you know when it's OK to succumb to peer pressure?  and when to resist?  You have to follow your own values and beliefs. If they are clear and strong enough in your child's mind, then you have to hope they have the courage to stand by them, regardless of what people around them may say or think.

It's also important to lead by example, show them that you take the initiative at times and start movements rather than just follow the crowd.


Encourage your children to follow through with ideas they have for things to do. To start clubs, or try new sports and activities that aren't just ones their friends do already.

By encouraging our kids to be individuals, we are showing them how to be leaders not just followers.


There is nothing wrong with following a movement and getting involved with a group or activity that you enjoy and want to join and become a part of.  But I believe it is vital to teach our kids the importance of having their own opinions and ideas, and not being afraid to act upon them and stick to them, even when it means going against the majority.

Are you someone who is happy to stand out from the crowd for your own beliefs and values?  Do you agree that we should teach our children to stand out, not just fit in?