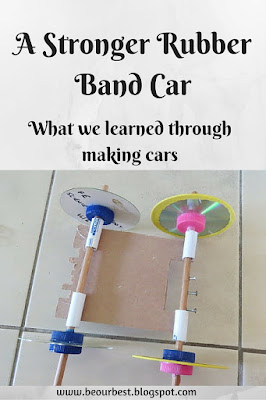 After making several different 'cars' a couple of weeks ago, our daughter had one final try at making a stronger faster rubber band car before she goes back to school next week.

She decided to stay with the simple design she'd used before
(you can see her previous creations and how well they worked here). 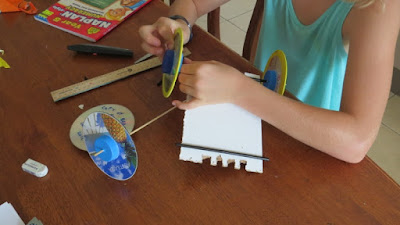 This time she used a thin piece of plywood for the base instead of cardboard. The reason she did this was because she wanted to add more rubber band 'engines' to her car after a discussion and suggestion from Granddad! She had tried adding more rubber bands to her previous cardboard car, but the card just bent with the force of the wound up rubber bands!

So - wooden it was - and we found some wooden dowel rods to make the axles stronger too. We used cut up sections from an old board marker pen casing to slot the dowel rods through so they would run smoothly. 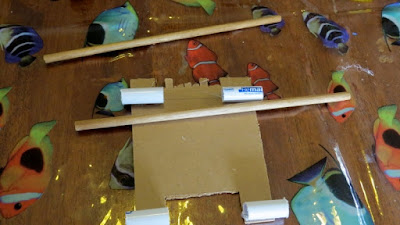 Here is her completed final rubber band, wood and CD car. If you can see on the back axle there are three small screws to attach the rubber bands to and notches on the front of the car to loop the other ends around. So this is her '3 cylinder' car! More engines, more power! Here is how far it managed to travel, carrying a tuna can, up a slope we had built from cardboard.

Although the car didn't make it quite to the top of the slope as we'd hoped, we'd spent enough time on the cars and so decided to stop there and take stock of what we've learned.  Maybe we'll revisit making cars after a few weeks break!

So what did we learn (and I say we because I've never made cars before and learned just as much as our daughter did!)?

Give it a go yourself!

I would highly recommend spending time with your kids learning how to make something like a rubber band car.  I watched several you tube videos myself first to get the basic idea of what to do, so that I could help as best I could.  We also did things in small stages so that neither of us got too fed up or frustrated.
Building up the project over 3 weeks was also definitely a good thing to do, as it gave us time to process each step and everything we had learned before trying to apply and build upon that when we tried again.
We used materials we found in the house so it didn't cost us anything other than a little time, but it was time well spent, learning and experiencing something new with my daughter - and not only that, it was great fun!

This project was inspired, partly by a balloon car kit our daughter got for Christmas, and partly by the Opti-minds challenge our daughter took part in last year. She and her friends did the Language Literature Challenge last year but are considering doing the Science Engineering Challenge this year and so I thought it would be fun to have a go at last year's Science Engineering Challenge together in these summer holidays to give her an idea of what to expect. They had to move a tuna can at least 1.5 metres in distance and upwards at least 0.5 metres.  Although we didn't quite manage this, I think our daughter learned enough in terms of science principles and also the need for persistence and trial and error, so that if her team chooses the Science and Engineering challenge this year, they will have at least some ideas on where to start!

Have your kids ever done a challenge like this before?
I think Opti-minds, or other challenges like this are a great thing for kids to do to learn all kinds of skills. I will be interested to see which challenge our daughter's team chooses this year.