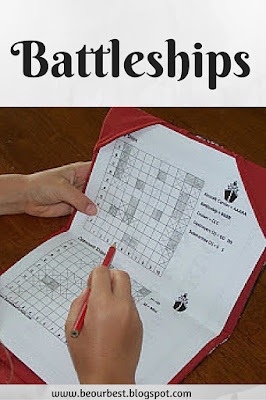 When our daughter was 7 years old...

once home and settled, I began to get out some paper and pencils 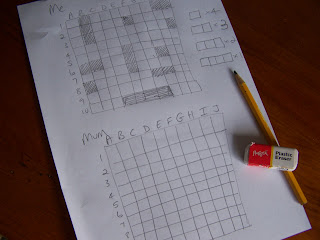 I think that shows the difference in our generations!  I never even thought about playing Battleships on the computer - not having played since I was a child, and that was always on paper!

However, our daughters were both happy to play on paper - and we found they really enjoyed this simple game. 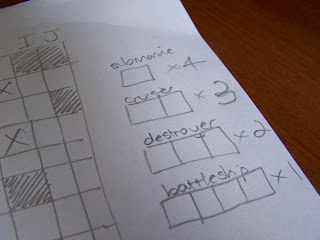 I drew the grids and explained about what ships you have to draw in your own grid. I couldn't remember the exact names we used to give each sized ship, so I made it up a bit here - but I don't suppose it matters all that much!  You draw all your ships into your own grid, but none may touch each other, even diagonally.

Once we started to play, I found our 7 year old had no problems at all - I guess she had played it at school earlier that day, but the concept was fine for her to understand.

Our 5 year old however hadn't seen a grid like this before - with numbers down one side and letters across the top, so all of that had to be explained.  She had to run a finger down from the letter at the top, and across from the number at the side, to find the square she was looking for, whereas the 7 year old could do it just with her eyes! Interesting difference!

Basically you take turns, 'orally' firing bombs into squares on each other's grids to try and hit their ships.  Once you hit all the squares that make up a ship, that ship is sunk.

By the end of one game, both girls understood the game completely and were having a great time; especially making the noises of bombs exploding as they hit various ships, and then the 'Glug Glug Glug' sound as ships were sunk! 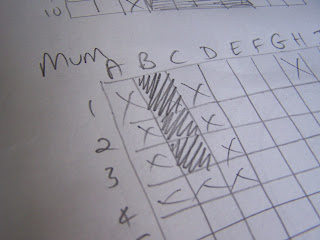 This really is a great game to play with your kids. For a start, you can play it anywhere so long as you have a couple of bits of paper and pencils.

It gives kids great practice using a grid with basic number and letters.  It also helps them use their logic - when they've hit a part of a ship - to guess where the rest of the ship lies.  From our experience with our daughters too - it looks like it could be a good eye-tracking exercise too!

Battleships as a pencil and paper game is around 100 years old.  Nowadays there are various other versions, such as board games, PC games and internet versions, like this one I found, where you can play against the computer:

There was even a movie (Battleship) released in 2012 loosely based on this game!

Do you remember playing battleships as a child? Does anyone else still play the pencil and paper version? or do your kids play online?

I also made a set of Battleships folders for my girls which they enjoy using to play this game - with paper and pencils!) 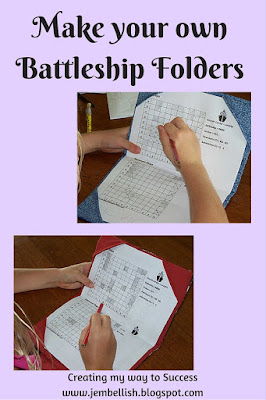 The tutorial also has a link to a free downloadable Battleships grid!