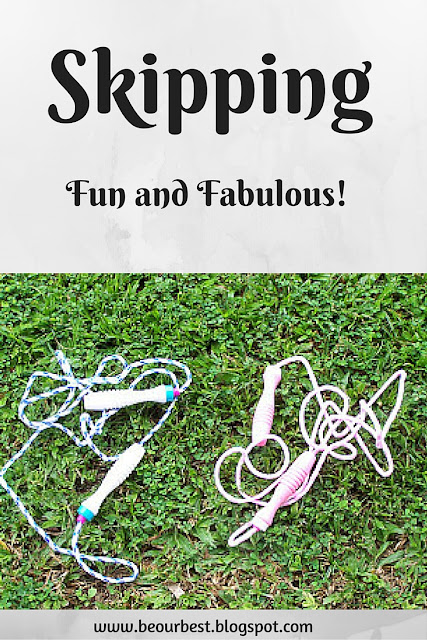 My interest in skipping was renewed as an adult when I went to help out at my daughter's prep class at school.  I was helping with the PMP (Perceptual Motor Program) class where the children work on such things as balance, coordination and gross motor skills.
On this particular day I was asked to turn the rope for the kids to skip.  I was suprised to find that none of the 5 year olds could skip!  They did all however thoroughly enjoy trying.
That afternoon I stopped at the local hardware store and bought a length of rope for $6, then after school finished I took my girls into our yard and we skipped!

The girls already had smaller skipping ropes and had been trying to skip on their own for some time, managing a running skip but still not quite making the standing on the spot and jumping skip.  With me turning the larger rope for them (the other end tied to the fence) this gave them the opppourtunity to learn the rhythm of jumping over the rope without having to worry about turning the rope with their arms at the same time (which does require a good amount of coordination!)

They learned this very quickly, and soon they were each challenging themeslves and each other to see how many skips they could count before they tripped on the rope.  We also tried running in and running out while the rope was turning.  Vague memories began to return to me of skipping rhymes, but I couldn't remember anything complete, so that evening I googled skipping rhymes and found many old favourites that I could then try with my girls.

My favourite, and the one I remembered most was:

We've also tried Teddy Bear, Teddy Bear turn around - together with the actions!
And how about this one:

Cinderella
Dressed in yella
Went to meet her handsome fella
On the way her undies busted
How many people were disgusted?
1,2,3,4.....(until the rope is trippped up!)

For more rhymes go here for a huge list!:

There are so many great rhymes, with actions, counting or just a little story!  Making skipping an even more fun activity for kids, and a great way to exercise!

That first evening of skipping, I was itching to have a try myself.  My girls are too small to turn the rope for me, so I had to wait until Euan came home.  OH MY GOODNESS! It's hard!! You forget what a strenuous form of exercise skipping is when you get involved with all those rhymes, counting and actions.  As a kid, I skipped endlessly, singing away as I did so.  Now, however, I could barely catch my breath, and my leg muscles were burning after just a few jumps!

Skipping is an excellent form of exercise - it is great for your heart, and, being high impact, puts stress on your bones, which in developing bones is great as it encourages optimum bone mass formation and so reduces the risk of osteoporosis in later life.

As with any form of exercise, it is good for your brain, as it increases blood flow to your brain and so increases alertness and concentration levels.  With the addition of rhymes and songs, your memory also gets a good workout.  Rhythm and balance also come into play, and as with bouncing on the trampoline (see here for more about that!)  it works both sides of your brain at the same time.

Skipping is fun, and also a great way for kids to learn about mastering new skills and achieving goals.  Watching my daughter's class at school, and my girls at home wanting to try skipping again and again, was just brilliant. They were never discouraged by the rope catching their legs, or when they mistimed a jump, or even when they fell over.  They were all having so much fun, none of that mattered.  They persisted, and when I helped with the same activity a few weeks later, they were all skipping really well, and now practicing running in and out of the turning rope.

Skipping can also foster good team work skills, when kids turn ropes for each other.  They must learn to work together, and take turns.

There is a more complex form of skipping called "Double Dutch" where two ropes are turned at the same time but in opposite directions.  We recently watched a great Disney movie about this called "Jump In".  It was all about a young team who decide to skip competitively.  There are some amazing skipping scenes in there, and it certainly inspired my girls to get outside and skip some more!

In the movie there is a teenage boy whose friends tease him for skipping - because is seen as a girls sport, but historically, skipping was practiced by men!  Australian Aboriginals used to skip over bamboo, and Egyptians jumped over vines.  As skipping became more popular in modern times, kids skipped through wooden hoops, and even Mum's clothesline - which was better when wet, as it hit the ground and swung better! And speaking of boys skipping - we all know those tough-guy boxers skip as part of their training! You wouldn't want to tease them about skipping being a girlie thing to do!

Skipping is definitely one of those childhood fun activities worth revisiting as and adult and encouraging your own children to do.

A friend's child learnt to skip whilst bouncing on the trampoline.  The whole skipping movement was slowed down and exaggerated as she bounced, enabling her to learn the action of jumping and moving her arms in time a little easier!

As a kid, skipping is fun, great developmentally, improves balance and co-ordination and is of course, good exercise.  As an adult, skipping for 10 mins is equivalent to a 45 mins hard run! So next time you say you don't have time to exercise, why not grab your kid's skipping rope? It's good for your heart, blood pressure, muscle tone, promotes fat loss, increases flexibility....need I go on?

There is an Australian website called "Jump Rope for Heart"  It has an annual fundraiser for schools, run by the Heart Foundation to raise awareness about exercise and healthy eating, and also raise funds for the fight against cardiovascular disease. It has been going for 27 years and more than 90% of all Australian schools have participated!  Sounds like a great thing to do!

Have you been involved in this? or a similar event? Do you or your children skip? Do you remember skipping as a child?
And how long do you think it would take to learn how to do this.....

Please leave a comment, and tell us about your skipping memories or experiences!