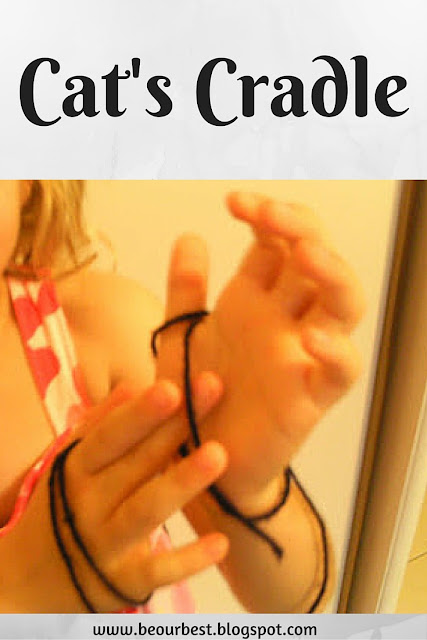 At the weekend, I had some one-to-one time with our youngest daughter, while the eldest went off to yet another birthday party!

We played some card games, then went on to Kerplunk (a game where you pull out sticks that hold up marbles but try not to let the marbles fall). This game then evolved into my daughter giving me a cooking lesson using the game pieces.  The marbles were various fruits, and the sticks either cooking implements or ingredients depending on what was needed.  She spent a good 45mins 'teaching' me how to cook all sorts of things! Then asked me to teach her something real!  Something that I knew how to do but she didn't!

For some reason, the first thing that popped into my head was Cat's Cradle - the string game.  I don't know what prompted it as I haven't played this since my own childhood, and all I know how to do is the basic cat's cradle.

This is where the wonderful internet comes into play.  We got out some wool, cut and tied some loops and sat down with the computer and Googled "Cat's Cradle". We found several picture instructions, and I used those and my own memory to teach her the basic cat's cradle.  Then we found a you-tube video which shows you how to do more! There are many videos, but here's the one we used:

This string game - is found in many different cultures all over the world and wikipedia tells me that
Cat's cradle is probably one of humanity's oldest games! In Japan it's called 'ayatori' and in some parts of the US  it's called "Jack in the Pulpit".  Whatever it's name, it is an incredible game of fine motor skills and dexterity.  Some of the shapes made have names like 'Jacob's ladder' and 'The Witch's Broom'.

There is even an International String Figure Association which was founded by a Japanese man around 30 years ago, to gather, preserve, and distribute string figure knowledge so that future generations will continue to enjoy this ancient pastime.

As I look into each activity we do with our children - mostly well known games and activities, I am fascinated by the history and meaning of these games, and I'm proud to be introducing these games to my children as pieces of culture, meaningful educational activities, but above all fun things to do.

My daughter has been playing around with the 'cat's cradle' string ever since, and even made up her own word document on the computer about it, complete with pictures and photos, to take to school for show and tell!

Have you ever played cat's cradle? Do you call it by that name?  Do you think it's important to preserve our old traditional games like this?