How much did I weigh when I was born? 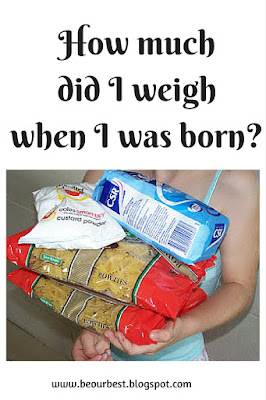 This week our youngest daughter needed a photo of herself as a baby to take to school for a project.  The photo she chose was the one we sent out with her birth notices.
When I was scanning the photo, she was busy  reading her own birth notice!

Our elder daughter has recently been studying weights (kg and g) at school, and so these two circumstances together led to an interesting activity with my kitchen scales.

First, the girls happily weighed various items they found lying around; then we moved onto their own birth weights and how we could reproduce that.

My pantry was searched and various foodpackets showing their weights were pulled out - sugar, custard powder and pasta.  We then weighed each item (to check the weight stated on the packet was correct!) - we found a few grams variance but basically they were right.  Then I piled up the various food packets into the girls arms until they were each holding the equivalent weight to themselves as newborn babies!

They both thought this was great fun, especially when I showed them the difference between the two of them at birth was a packet of bow pasta!!

Since our eldest is learning about weights, I had thought that helping me with some baking would be a great way to  get some real-life and useful practice of weighing.  Today's 'newborn weight' activity was not something I had thought of - it just happened naturally.

It just goes to show that sometimes the best ways to help our children learn and practice things occur spontaneously; it's just a matter of being aware of the potential value of everyday situations and activities.

The girls practising weights measurement through relating it to their own weight as a baby was fun, and more likely to stick with them than say a worksheet full of numbers and weights.

Do you have any stories like this, where real life and circumstance provided a surprising opportunity to learn and practice something -either for yourself or your children?

Email ThisBlogThis!Share to TwitterShare to FacebookShare to Pinterest
Labels: numeracy