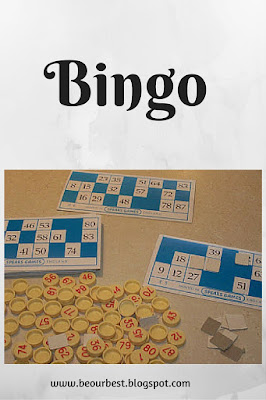 Probably one of the simplest and best known games with numbers is Bingo.  We've all played it at one time or another.


Playing Bingo is not only good practice for those still learning their numbers, but it is also a powerful tool in improving memory skills, has been used in classrooms for hundreds of years!

Bingo can help your mind become more agile and improve your speed and reflexes!  Some people play with several cards - and there is limited time between each number called in which to located the corresponding number on your card.

Another great thing about Bingo is that it does not have to be just played with numbers.  It can be used with whole maths problems - the caller shouting out the questions, and the players marking off the answers. Or you could use it for vocabulary, general knowledge, or, well pretty much anything!

We've used it to practice Japanese numbers too when our girls were learning those.

No special equipment is needed - just a pen and paper. You can make your own boards, and cross off your own numbers as you call  (or alternative themed game topics).

When was the last time you played Bingo?  Have you played other forms than just the basic number version?