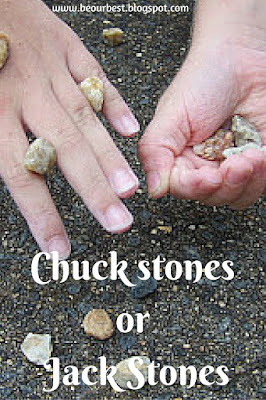 This is a very old game which has many different names; pieces made from a multitude of different materials and a whole manner of different ways to play it.

I know it as 'chuck stones'  (as it is called in the North-East of England where I grew up) - played with 5 small wooden cubes.  It is also known as 'knucklebones' in Australia, where 5 knuckles from a lamb shank were used to play. It is also known as 'gonggi' in Korea, where 5 weighted plastic 'stones' are used.

The game originated from the times when children had to 'find' their own toys and games to play in their surroundings - rather than go to the toyshop.  Small stones and bones were easy to find.

The game is essentially played by throwing the stones (or other objects) up in the air and catching them in different combinations and in different ways.

The most basic one is to start with all five stones in the palm of your hand, throw them up in the air, turn your hand over and try to catch as many of the stones as you can on the back of your hand.  You then throw those you caught up into the air again, and try to pick up those you didn't catch before they fall back down again and you catch them too in the palm of your hand!
Sometimes it is played with a ball too - which is bounced and used as a kind of 'timer' for throwing and catching the stones.

There are many different variations on this - many of which have names! A good list and description of the variations can be found here, for anyone interested!
There is even a World 'Jacks' Championships!

Here's a video showing some variations on the game.

Chuck stones is a great game for developing dexterity, and as an ancient traditional game that has been played for thousands of years all over the world - also an important piece of human culture to pass on to our children.

I introduced this game to our girls and they really enjoyed it.  Very challenging, but definitely an easy one to come back to again and again, play in different ways and with whatever 5 small objects come to hand, wherever you are.

Do you remember playing this as a child?  What did you call it and what did you play it with?