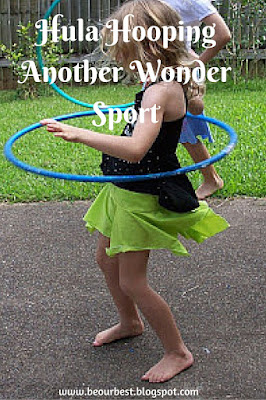 When we think of hula hooping, we think of a plastic kid's toy but there is so much more to it than that, as I discovered when I started researching.
It is a fabulous form of exercise for both kids and adults, you can spin hoops around your waist, legs, arms or neck; do tricks, roll them and there is even a whole hula hooping community out there in the world - with a full-length documentary movie about them, and have you ever heard of World Hoop day?  I'll get to that soon! But first let's look at where it all began!

The History of the Hula Hoop 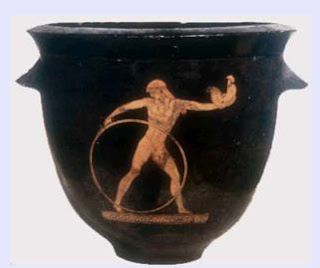 Hula hooping is an ancient practice - thought to have been popularised by the ancient Greeks.  Formerly made from wood, metal, vines, bamboo or other natural materials, they were used not only as a children's toy, but also as a fitness device.  Native American Indians and Eskimos used to use hoops to roll along and use as a target to practice for hunting by throwing and shooting arrows through them.
Hula hooping became popular in Britain in the 14th century as a children's toy.  British sailors first saw Hula dancing in Hawaii around the same time, and with the similarity in movement - the name 'hula hoop' was born. 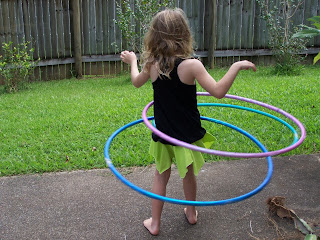 The first plastic hula hoop was made in Australia, back in 1957, and sold in Coles department stores.  They couldn't produce enough to keep up with the demand.  A year later plastic hula hoops were marketed in the USA and the craze took off with millions sold.

In some countries of the world, hula hooping was banned -  it was offensive to shake your hips in public in Indonesia; Japan banned hula hooping because the hip rotating looked indecent and the Soviet Union saw it as a negative Western practice.

For some people, hula hooping is a way of life.  There is a feature film length documentary about people for  whom taking up hula hooping has changed their lives.
'The Hooping Life' - 'with a hoop and a dream they changed their worlds'.
The trailer is worth a watch!

Then there's World Hoop Day,  which has been running since 2006 - and is an organisation which distributes hula hoops to disadvantaged and poor children around the world as a simple way of bringing joy to an otherwise devastating situation. 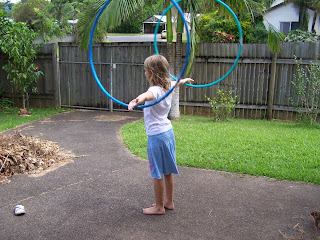 As a form of exercise, hula hooping has many  benefits.  As with any kind of exercise and movement, it increases the blood flow to your brain, making you more alert, gets your heart rate up and increases your energy levels.  Hooping also increases spinal flexibility, strengthens those all important core muscles, improves co-ordination, balance and even massages your internal organs and intestines as it circles your waist - which is said to work like acupressure on key points, releasing blocked 'chi'!!.


You can circle the hoop on your arms to tone those muscles, or even lie on your back and use your legs!  The possibilities really are endless when you start to think about it, and see what some people can do with a hoop!

Nowadays you can buy all sorts of hoops - coloured, glow in the dark, glittery, flashing, even weighted ones specifically for exercise purposes, and ones with built in calorie counters!

Just have a look and see for yourself what can be done! My daughters and I spent ages with this video going again and again on the laptop outside while we tried to copy some of the moves! Great fun!

So what are you waiting for - go grab your hula hoop!  I had to re-learn as an adult how to do it! I was surprised to find it's actually a rocking motion rather than a circular motion that you need to keep the hoop rotating.  Oh and the ideal size for a hoop should be - up to somewhere between your stomach and your chest when it's resting on the ground.  I can do it with my kids hoops - but maybe it's easier with one the right size!

Whatever you believe about the benefits of hula hooping - it certainly is a fun form of exercise - what more encouragement do you need??