How to do a cartwheel 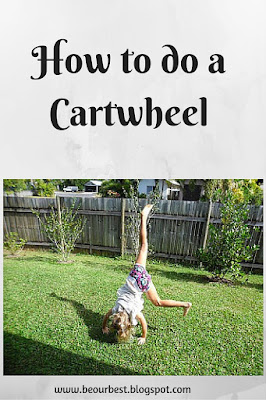 Recently our girls have been trying to do cartwheels.  They can manage the basic action, but their arms bend, or their legs bend, or sometimes they just land in a heap!  So I've been trying to help them.  Now I did gymnastics for years when I was younger - and yes, can still do cartwheels, and ahem, almost, the splits!  But trying to teach my girls how to cartwheel has had me stumped.

We've been practising them every day - 5 cartwheels a day each (me too - so I can lead by example, in both how to do the cartwheels, and also in the motivation of sticking to something each day).

As a result of this practice, I think their cartwheels are improving a little, but decided I needed a little more help for them - so we googled, and found this great youtube video!

Pretty good - and the stretching at the beginning, has led to more discussion with our girls.  As a result of this discussion, we've decided that we need to 'train' a little more than just repeatedly trying cartwheels.   Every day we're going to stretch a little and then try to follow the form on this video! We're also going to practice handstands, to strengthen our wrists and shoulders some more! 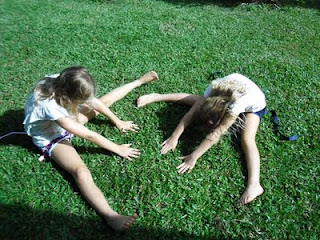 I wonder how long it will take to perfect?  Is it a matter of building the strength in their wrists, shoulders and arms? Or is it more technique??

While we're on the subject of cartwheels, I remember a few years ago, a school in Queensland banning cartwheels at school because they were considered too dangerous!  (I looked back and found the article here if you're interested!).  That is just crazy!  If they are going to ban something like cartwheels, they may as well tell the kids to sit at their desks at break times and not move in case they hurt themselves! Then where would we be with the obesity situation with kids?

But getting back to teaching cartwheels; can your kids cartwheel?  Can you?  When did they learn? Did you teach them?  Any 'cartwheel' secrets you can tell me?