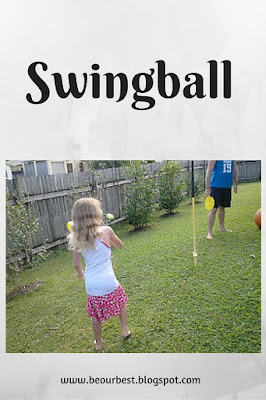 Now that the weather is cooler here in tropical north Queensland, our girls are getting to play outside more and more - and not just in the pool!  For the summer months, the humidity is so high that outdoor play is really only the pool.  Now however, it's cool enough to play all sorts of games outside in the yard- a wonderful time of year.

One thing our girls have taken too this year is Swingball.  In case you've never seen this before, it's a game played using a pole in the ground with a string attached to the top, and a tennis ball on the end of the string. The string is attached so that the ball can swing around freely.  It can also be attached so that it winds itself up and down a spiral and reaches and 'end' after going one way for several rotations. In this way it can be used to play with two people, the winner being whoever gets the ball to their 'end' first.

It's a great way for kids to practice their bat-and-ball skills, and hand-eye co-ordination.  They can play alone, or with someone else.  We still enjoy playing as adults, and it's great to have something like this we can leave set up in the garden for the girls to go and play anytime they like.  Tennis in a limited space!

Similar to swingball in America is Tetherball.  I'd never heard of this until I found the description online when looking up Swingball.  It seems to be basically the same game,but using a kind of volleyball sized ball instead of tennis ball, and hitting it with your hands, instead of a bat!

Have you played Swingball or Tetherball?  Is tetherball something that people have set up in their backyards in the US? or is it played in schools?  I'd love to hear from someone who plays it or has played it - since this is the first I've ever heard of it!