Child beauty pageants - why not? 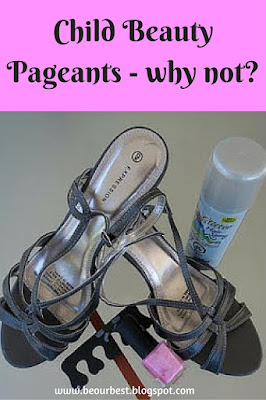 A while ago, across Australia, people rallied against child beauty pageants. A group called "Pull The Pin on Pageants" organized these rallies in every capital city across the country, concerned about the way these beauty pageants portray women and young girls. This came in response to news that an American company had decided to bring its pageant to Australia for the first time.

We've all heard about the extreme cases of parents taking their children to have their eyebrows waxed, fake tans applied and pushing their children to strut about on stage to fulfil their parents ambitions, and financial desires. But is it really the pageants themselves that we should blame and try to ban?

There are countless beautiful baby contents in shopping centres and promotions for photographers and baby products. Why are these not considered so controversial? Is it because they are non gender specific? It is still a case of the parents dressing up their child for a competition - the baby or child has no say in whether or not they want to participate or not, or have their photos published in a national magazine.

But this is the role of a parent. To bring their child up the way they seem fit. To choose which clothes their child wears when they are very young. To decide which school to send them. To choose what food they will eat and which friends they will play with. A parent is meant to have control over their child when they are young, and this control lessens as the child ages and takes more responsibility for themselves - responsibility and choices made from morals and values instilled in them by their parents. To impose an age restriction on beauty pageants, as many people would like to see happen, is like saying no parent is fit to make decisions for their own child.

Of course there are both good and bad parents, and everyone's opinion on what makes a good or bad parent varies.

I think we underestimate the influence a parent has on a child, and nowadays, external influences are blamed far too much for problems. Girls who develop eating disorders, may blame the trigger as being a comment from their dancing teacher at a young age, telling them they should eat less to stay slim. I myself did gymnastics for years as a young girl, and remember a coach telling me to watch what I ate - but I have never had any eating disorder problems. I believe my parents brought me up with a healthy respect for by body, my diet and my appearance.

There is also the argument that a child who does not win a beauty pageant is being told they are not pretty enough. Any competition has winners and losers. Is beauty not in the eye of the beholder? One work of art may win awards and accolades from some critics, but be torn down by others. Some children may cry when they do not win a simple colouring competition but does that mean the competition itself is to blame for that child feeling upset? Competition is healthy, and a natural part of life.

Yes, child beauty pageants I'm sure, will inevitably have entrants who are pushed, primped and preened by ambitious and overbearing parents, who have little regard for their own child's feelings. Some young girls will dress up like adults in high heels and short skirts with make-up on. (If you're female - tell me you never did this with your mum's heels and make-up!) But does this pushing from parents not happen in every area- from sports to academia? We can't ban everything, to try to stop pushy parents!

I say let the kids dress up and have fun doing it.