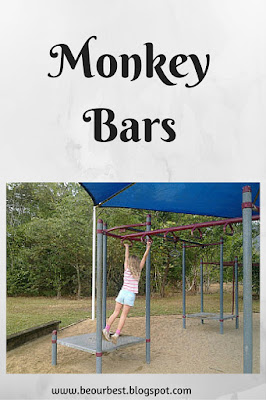 Have you ever tried to swing across monkey bars as an adult?  I've tried a few times at local parks when our girls and I are the only ones there!  (I don't want an audience!).  I watch our girls swinging across them with ease - forwards, backwards, dangling by one arm and turning around; then when I get up to have a go - I can make it across, but only just and my arms feel like they're going to be pulled out of their sockets!

Is the problem that I have a heavier weight to support than them?  Or is it just not an exercise I'm used to doing?

The monkey bars are one of those things at the playground at school that every kid wants to be able to do.  In their prep year, they're mostly too short to reach them so can't even try. Then as they grow and move to grade 1,  they spend play times practising and showing off their blisters as badges of honour to each other and their parents, as they master this skill.

We do hear of many injuries as a result of kids falling off monkey bars - and there have been instances of the equipment being banned. For example, a school in the UK banned children from going on the monkey bars in their school playground unless supervised by an adult.
Some of the problems with injuries are a result of children too small to reach the monkey bars themselves being lifted up - then the fall is too high for them if they subsequently slip.   More of the issue of the safety of play parks was covered in a post I wrote last week.

So far as me not being able to swing across the monkey bars as an adult (I had no problems as a kid I'm sure!) perhaps I just need to practise every day until I get blisters on my hands!  Then I can show them off proudly to my kids!  I'm sure they would be impressed!