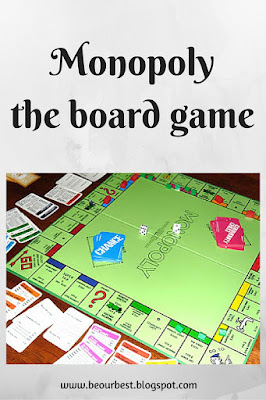 Surely you know the board game Monopoly?  It was one of my favourite games to play as a child.  Games used to go on for hours or even days, with IOU notes being written to try and avoid bankruptcy, and extra rules added to prolong the game - like paying someone who was close to bankruptcy to move your piece around the board!

I even had a book on Monopoly tactics and strategies, which I was convinced helped me when I won (although my brother who I usually played against had also read the book!).

Monopoly the board game is over 75 years old.  According to the official website, the longest Monopoly game in history lasted for 70 straight days!  And there was a monopoly board once made worth $2 million dollars - with a 23 carat gold board and diamond studded dice!!

The original game had streets and locations in the UK - but now there are endless collectors editions like Star Wars and Cars versions and of course different versions depending on which country you are in - with streets from cities in your country to buy and develop!

Our girls are finally old enough to learn to play.  We don't have the Junior Monopoly, only the regular version. Both girls coped well with the game (at ages 6 and 8), although the younger one needed more help with all the maths involved!

For a start there's rolling two dice to move.  Simple addition and counting as you move your piece.  Then there's all the money - paying rents, giving change,  buying houses and so on.  There's multiplication when you land on a utility and the rent is 4 times what the dice roll was.   There is a lot of repetition and landing on the same places, so for example the rent of $18, becomes automatic to pay $20 and get $2 change without having to work it out!

As the game progresses, and houses and hotels are built - the monetary values increase too, so does the level of difficulty of the maths involved.  There is also the added difficulty of the 10% fee to un-mortgage a property!

We played this morning for 3 hours straight!  Phew! Our elder daughter helped the younger one with some of the calculations, and there were several runs to the times tables poster in the hallway to work out rents payable! They LOVED it!  And I was amazed how fast the time flew - and that they never asked to stop!

I think Monopoly is a great game to introduce your kids to when they are old enough.  Our girls played again by themselves for the rest of the day!  Great practice for their number skills, but also skills of negotiation as they swap and buy properties from each other,  social skills as they work together and of course learning to cope with winning and losing  in an acceptable way!

Aside from the traditional board game - you can now play Monopoly online.
There are even Monopoly World Championships for those of you who get really good!!

When was the last time you played Monopoly? What versions have you played?  Do your kids play it?
I'd love to hear your thoughts on this wonderful game!

Email ThisBlogThis!Share to TwitterShare to FacebookShare to Pinterest
Labels: board games, games, numeracy