How to teach your kids persistence 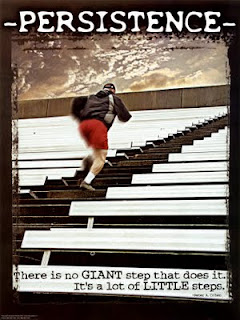 
"If at first you don't succeed, try and try again"


Who has not heard this quote - or said it to someone else to encourage them?  Persistence is such an important thing to have in life - and a vital thing to teach our kids to have.

Some kids seem more naturally persistent than others.  Second and third born children are perhaps more inclined to be persistent than first born - as they strive hard to keep up with their older siblings. I would say this is true of our girls. Our younger daughter is constantly pushing herself and persisting in trying things so she can do just as her big sister does.

Parents play a vitally important role in whether or not kids develop more persistence as they get older.  I believe we should not allow our kids to stop and give in when things get tough; or come home from school for a minor aliment, or give too much attention and sympathy for a minor hurt or cut.  We need to encourage them with our words, supporting and encouraging them to not give in, and praise them when they battle on.

Kids sometimes need to be pushed to complete a task when they start to get bored, or tired or feel it's too difficult but they also need to be able to see a reason for their persistence.   Small attainable goals and rewards are very important so that kids learn the value of persisting.

I do wonder however about kids being persistent when asking for things from their parents or teachers.

When a child is told "no" they often ask again - or even ask the other parent, or another teacher the same question to see if they can get a "yes" from someone else.
I've always believed parents should be firm when they say no, and not then later give in to their child when they ask again repeatedly for the same thing.  I know the temptation there is to give in just to stop the whinging - and many parents do.

But is this child not  just practising persistence? The very thing we want them to develop?  Is it really so wrong to give in to a child when they are so persistent? Should we not be praising and rewarding their persistence?

I'm sure there is a line there - where kids should be respectful of their parents and teachers - and the  rules!  But is it not also true that we should teach our kids to question things, and understand reasons.

Perhaps the compromise here is, that when we tell our children 'no' we should explain why.  Then if they decide to persist in asking for the same thing, encourage them to give reasons why we should say 'yes'

What do you think about this?  Do you ever give in to your children and say yes after initially saying no? Do you think there are different kinds of persistence? Or is any persistence to be encouraged?