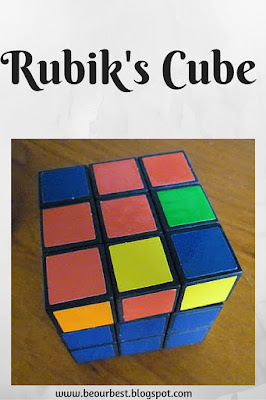 Do you remember the Rubik's cube?
Created in 1974 by Erno Rubik - a Hungarian sculptor and professor. It was originally meant as a way to explain 3D geometry but the Rubik's cube became incredibly popular as a toy in the 1980s.

I remember my brother and I getting them as kids, and learning the moves to be able to solve the puzzle - making each side one solid colour.  Initially Dad got a book with the solution in, and he taught me the moves - giving each move a 'name' to help me remember.

To this day - around 30 years later - I've found I still remember those moves - "twiddle twiddle up.... down down round round up up....."  I think I did it so many times, that in the end I learnt the moves by rote - just like my times tables - and they stuck!

Santa brought our daughters a Rubik's cube each for last Christmas - and they are very impressed with Mummy's skill in being able to solve it!

Now there is a whole website about Rubik's cubes.  You can buy all manner of Rubiks cubes and novelty items; learn how to solve the Rubik's and other cubes; see pictures of Rubik's cube cakes, and watch Rubik's TV including seeing someone solve the cube in just 5.66 seconds!! Unbelievable!

This amazing cube is used as an educational tool in maths classrooms.  There is a whole website dedicated to ways to use the Rubik's cube to teach various maths skills.

I don't know how technical I could get with this - or would want to, but I do think I'll try to teach our girls how to solve the Rubik's cube.  If nothing else it is satisfying to be able to do it - and pretty cool too!  If it can also help with their maths, fine motor skills, and provide a good way to help improve memory skills when learning the moves, then so much the better!

Have you got a Rubik's cube? Can you solve it?