It's nice to be appreciated! 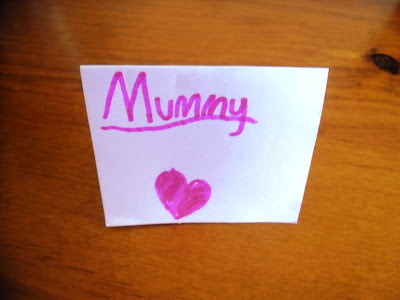 I'm sure every mother having spent time cooking dinner for their family, has then had instead of thanks, comments like...
"oh no, I thought we were having...."
"I don't want to have that."
"I don't like that."

I'm sure I myself was guilty of this as a kid too (sorry Mum!!)

Last night I got a comment like that - and had had others over the weekend.  I'd had enough and angrily snapped back that I'd spent time cooking a meal for everyone, the least I could have was a little appreciation!

Everyone looked suitably embarrassed, but my younger daughter just said,

"After dinner look inside the note I gave you."

(She had handed me a folded piece of paper as I was cooking, but told me not to read what was inside until after dinner).

We all ate dinner, then after I'd finished, I went to read the note.  Here's what I found... 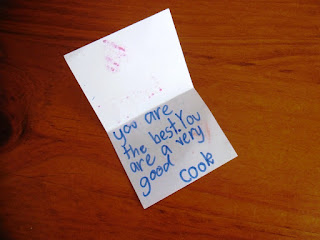 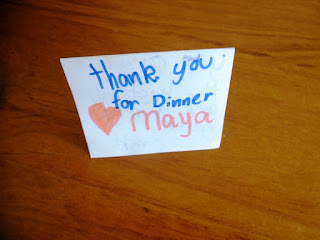 Now who's embarrassed!!!
She wrote this before she knew what was for dinner, and before she had tasted it.

We all say things sometimes without thinking about their effect on others.  We are just voicing our feelings, not deliberately being mean.
Yes we need to teach our kids to be tactful and mindful of other's feelings, but we also need to encourage them to express their feelings and thoughts.  They need to know that they can tell us when they don't like things, or they aren't happy.

When kids complain about what's for dinner, they aren't criticising the cook, they're just stating the fact that they would prefer something else to eat, or they don't like part of what's on their plate.

I know our kids wouldn't say they didn't like dinner if they were at a friend's house as a guest for dinner. I know they would politely eat what they were given.  They do however need somewhere where they feel comfortable expressing their true feelings without being snapped at for doing so!

We spend a lot of time teaching our kids manners, and how to behave; but sometimes they have things to teach us too!

Email ThisBlogThis!Share to TwitterShare to FacebookShare to Pinterest
Labels: manners