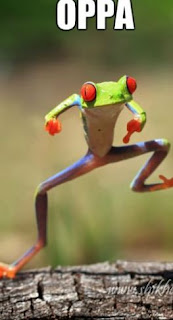 So, we’ve just stopped shuffling and here we are with a foreign language dance craze the kids are dancing round the pool to!

The whole world and now Australia now know about Psy and his catchy, get stuck in your brain song - Gangnam style…. It is now even number one in Australia!
The kids didn’t know 99 Red or Luft balloons, they knew La Bamba as a “I want my lasagne’ parody and the ketchup song  is just plain weirdly named.
Psy, the cheesy Korean that has finally managed to bring K-Pop mainstream to Australia- and it is hilarious.  Even the lyrics, translated are funny:

English Translation:
Oppa is Gangnam style
Gangnam style
A girl who is warm and humanle during the day
A classy girl who know how to enjoy the freedom of a cup of coffee

So, when we heard the catchy tune, we looked at Youtube and then saw the moves- the kids were instantly hooked.
The moves are sooooo easy to do- ‘riding your invisible horse’, while lassoing followed by posing and being blown up- perfect!!! 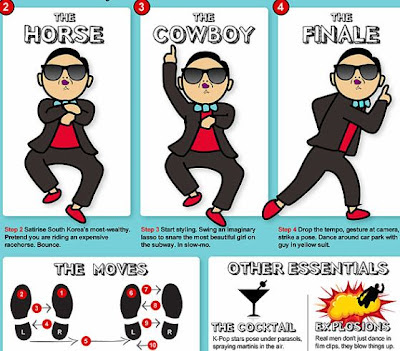 And, it is far easier than trying to remember the words for La Bamba.  Maybe there is something to be said for just using the lasagne parody!

Now you know the moves, get the kids ready.
Watch it through once on you tube and ‘ get gangnam’ !!!
Enjoy……..