The speed of change - don't get left behind. 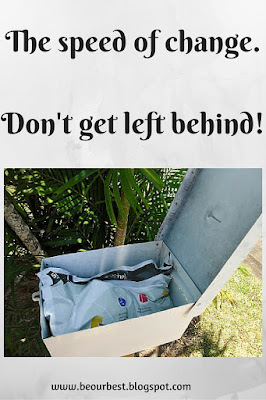 This morning I received an email about a package I've been waiting for.  It was a swimsuit for our daughter that I'd bought from ebay.

Now I was until now, unaware that packages could be tracked quite so accurately!

The first email I received told me that the package had arrived in Cairns and was currently "onboard with driver".
The second email I received a few hours later said the parcel was 'delivered'.

I was sitting at the computer when the email arrived, so I went straight out to the letterbox and sure enough there was the parcel!

Now being told via email that there's something in my letterbox is just a bit weird.  I also find it strange and amazing to look at our own house and others on Google Maps- where you can effectively 'stand' at your front door and see what it looks like as you turn in all directions.

I am still constantly amazed at the advances in technology since I was a kid, and I reflect upon how different the world our kids are growing up in is to the one we grew up in.

Do you remember cameras that used film rather than digital cameras?  I grew up with cameras like that. I remember the excitement of waiting to collect the photos from the shop to see what they looked like once developed.  I also remember the embarrassment of paying for blank photos after opening the back of my camera to see what it looked like inside!
For our kids - we take a photo and they immediately want to see what the photo looks like - as you can with a digital camera - there is no need to wait!

Cameras, mobile phones, the internet, these have all made our lives faster, more instantaneous and removed a lot of the suspense of waiting for something. Or rather the suspense might still be there, but the resulting end comes much faster.

Now we can text or write emails to our friends, and receive instantaneous replies from anywhere in the world.  We don't have to write a letter, post it, wait for it to travel to its destination then wait for a reply to be written and be posted back.

Do you think this shift in speed is reducing our patience levels?  Kids these days just aren't used to having to wait for things in the same way we used to.

In the world today - a short attention span may not necessarily such a bad thing.  Kids with 'grasshopper minds' may actually be at an advantage to cope with the increasing speed that information is being made available to them.

We do try to encourage our kids to do a lot of things a more 'traditional' way I guess, rather than turning straight to technology.  Play outside and play board games rather than play games on computers; to work sums out in their heads rather than reach straight for the calculator;  to read a book rather than just watch the movie.

We want our kids to have the skills of patience, knowledge, mental agility and physical ability - all of which we can see them gaining from doing things 'the old way'.
To exercise by playing outside rather than playing games in the lounge on the Wii-fit, seems much healthier and more beneficial to our kids. On the other hand - using computers, mobile phones and other technology arguably increases different skill levels in our kids - perhaps more relevant ones to life in the future?

I do sometimes wonder, if we place too much emphasis on doing things the slower, older way.  We try to encourage our kids to use technology but I think compared to some other kids their age, they don't use that technology nearly as much.

Since the jobs our kids could be doing in the future could well be ones that don't even exist now - should we put more of an emphasis on moving with the times and accepting that things are changing rapidly now and to stay ahead in the world today, our kids need to be at the forefront of technology too?

As with everything I always come back to the importance of finding a balance in life.  Being up to date with current technology doesn't mean being stuck in front of a screen inside the house; technology is becoming smaller and increasingly mobile.  But I still believe kids still need to learn basic life skills. They need to learn to use their brains and bodies first and then how to improve those abilities by making use of technology.

How about you? Are you moving with the times and keeping up with technology? How about your kids?
I've love to hear your thoughts!

Email ThisBlogThis!Share to TwitterShare to FacebookShare to Pinterest
Labels: technology