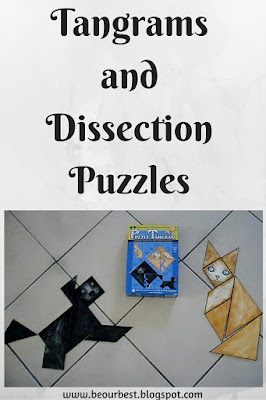 Yesterday our eldest daughter was telling me that they had been studying tessellation at school.

This led me to think about a puzzle that we had in the cupboard which was as yet unused: Tangrams!

A Tangram is an ancient Chinese art consisting of a set of 7 flat shapes that you put together to form other shapes. No gaps are left between the shapes as they fit together - just as in tessellation.
The Tangram set we have has the added difficulty of the 7  basic shapes needing to be first constructed using smaller jigsaw puzzle pieces. This is a great mathematical problem solving activity.

Having not done any jigsaw puzzles for a while, the girls enjoyed fitting these together - and then trying to make the initial cat and dog shapes with the resulting larger squares and triangles.  It was surprisingly difficult to put the shapes together as in the picture on the box!

Dissection puzzles like this help develop logical thinking and shape awareness, so they are a good educational tool as well as being fun.

Our tangram box has several shapes for the kids to try and create: 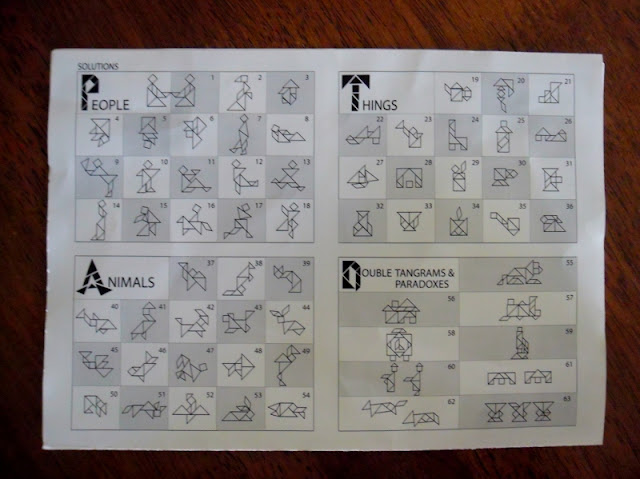 We have another couple of dissection puzzles in the cupboard that I shall have to get out to have a try at.

There are plenty of Tangram puzzles online and printable versions too.

Have you ever tried a dissection puzzle or Tangram before?

Email ThisBlogThis!Share to TwitterShare to FacebookShare to Pinterest
Labels: puzzles