Digital vs Analogue watches for kids 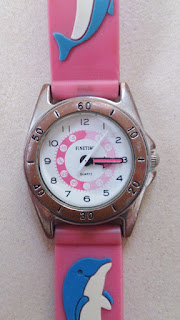 Should you get your kids an analogue or a digital watch?

When we got our girls their first watches, we chose to get analogue ones (shown here in the picture).  We wanted them to learn to tell the time this way first - not just simply read the numbers on a digital watch.

We also have analogue clocks around our house - so the girls did learn this way initially.

However - we equally found that once they had grasped analogue time - they had to learn to equate that to digital time.  It was all very well to be able to read the numbers on a digital watch and say, "It's 3.45"  but how do you say the same time in 'analogue'.

Learning analogue times also helps kids become aware of other basic maths concepts like fractions and even pie charts!. An analogue clock gives them a familiar point of reference to start from when learning further maths concepts at school.

Last year we explored when kids begin to understand time and found some activities to play with our girls using stopwatches - and some fun websites for them to play on to practise as well. I found another simple game here for some quick practice of converting between analogue and digital times.

I'm definitely glad we chose to start the girls off with analogue watches and clocks. We do live in a digital age with digital clocks on everything from phones, to microwaves and computers, but there are also still plenty of analogue clocks and watches to be found!

What kind of watch do you and your kids have?