Does smoking make you a bad parent? 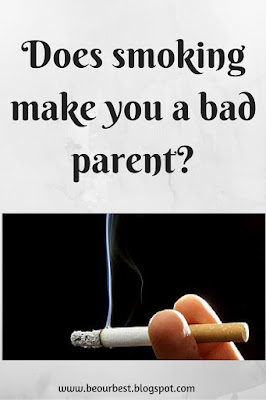 I just stumbled across this article on Mail Online, with the title, "Does smoking make you a bad parent?". Quite a provocative title and it certainly produced a lot of comments and discussion.

The article speaks about research that asked smokers the lengths they have gone to, in order to fund their smoking addiction.  Some people admitted to having done things like bought their kids fewer Christmas presents, cut back on their kids treats, not allowed them to join school trips, and even stolen from their own kids money boxes in order to be able to afford to buy cigarettes.


Mostly the article is talking about the financial strain of sustaining a smoking habit and how that affects kids of low income smokers.

However, the article also mentioned that some people also admitted to

"engaging in reckless and even dishonest behaviour to fund the habit."

This is a larger issue, when a parent goes down this track, the effects on their children can be far more damaging than missing out on treats or presents.

Then there is the issue of passive smoking. Kids whose parents smoke are far more likely than kids from non-smoking families to be exposed to cigarette smoke and the potential health threats it poses.

What do kids think?


I think it would be interesting to ask kids themselves how they feel about their parents smoking.  From my own experience,  when I was very young, my granny used to smoke.  All I can remember about this, is that she used to let me open the cellophane wrapping on the packets.  She quit smoking when I was very young, and told me when I was older that the thing that made her quit was my brother telling her that she smelled bad!


Although personally I don't smoke and don't like the habit, I wouldn't say that smoking necessarily makes people bad parents. Selfish maybe, or weak perhaps?

I think that as parents we have a responsibility to set a good example for our kids to follow.  Most parents, if not all, do things that are not necessarily good for us, and a good example to our children;  like eating fatty or sugary foods, not exercising enough or drinking alcohol.  But the problem occurs when it our actions effect other people, whether directly through passive smoke inhalation, or indirectly through drunken behaviour or perhaps obesity that may require outside care or the person, or influencing our children's behaviour and future habits.


As parents, we have a huge influence on our children's behaviours, particularly when they are very young.  There is plenty of research that shows kids whose parents smoke are more likely to smoke themselves than those whose parents don't smoke.

"Siblings and parents are role models for children. If a

child’s parents smoke they are three times more likely to


Over the past few years, obesity has become a very prominent issue in our society in terms of the medical effects on the population.

Does feeding your kids junk food make you a bad parent?


Ok, perhaps this is different from smoking as smoking is a habit, junk food is not necessarily a habit.


Our family has junk food here and there in our diets, our kids eat sweets, drink coke and get fast food, but as an exception, not a rule.

If that was what we were feeding our kids every day, then yes, I would say that would make us bad parents. That would mean we were having a directly negative effect on our kids health - in the same way that a parent smoking could be seen as having a directly negative effect on their children - through passive smoking, or the psychological long term influence this may have on their habits.

Whether it is smoking, eating junk food, drinking alcohol or some other 'bad habit', parents need to be mindful of the effect their actions can have on their kids.

What do you think?


Did your parents smoke?
Should everyone quit smoking when they become parents?
Does feeding your kids junk food every day make you a bad parent too?