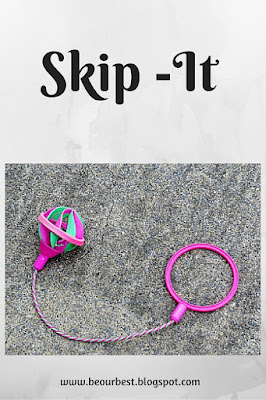 Did you have one of these toys as a child?  This type was originally released in the 1980s.
You put your foot through the plastic hoop then spin the ball around in circles, skipping over it with the other foot.

But they were not the first of their kind. In the 1960s similar toys 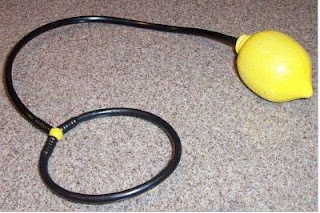 were released - like the Lemon Twist - which was a plastic lemon on the end of the rope.

This toy was even named on Time magazines list of

Different versions have been released - including ones that count your skips and make noises - see this commercial from the 1990s!

Our daughter has one of these toys now, and loves to play with it! I tried it too, and with a bit of practice and some bruised ankles, found it relatively easy and fun!

They're a great toy for getting your kids active,  helping them with their coordination and general fitness.

Do your kids have one? Did you have one as a kid?