Mastermind - a game of logic 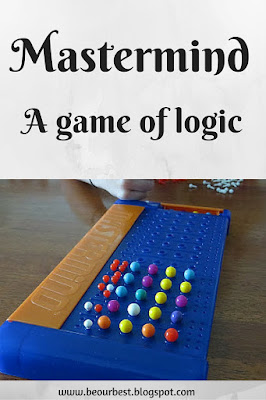 Have you ever played this game?

Mastermind is a two person code-breaking game that was invented in the 1970s as a board game.


The code-maker chooses a combination of 4 coloured pegs, and the code-breaker tries to guess this combination.  For each guess, white and red pegs are used to signify if the colours guessed are correct or not and in the right place or not.

This game is similar to a much older paper and pencil game called 'Bulls and Cows". This time the code-maker writes down 4 single digit numbers and the code-breaker tries to guess this. Instead of coloured pegs, the words bulls and cows are used to tell the code-breaker which numbers are correct and in the right or wrong place.


We used to have this board game when I was a child, and I remember enjoying playing it often with my brother or parents.    When I found the game in a charity shop here - I bought it and our girls now love playing it too!


I'd never heard of the paper and pencil version of this game - but love the idea that we can play this when we're out and about - perhaps waiting for something - with nothing more than paper and pencil which I always have with me !


You can of course play this game online.  I have the game as an app on my phone, and my girls have played it on there too. This of course is a way you can play it on your own - against the computer, if you don't have a friend with you!


This is a great game for developing and practicing logic and reasoning skills. Super simple and lots of fun!


What simple games do you and your kids like to play?

Email ThisBlogThis!Share to TwitterShare to FacebookShare to Pinterest
Labels: board games, logic, numeracy