How learning music can help your child with maths 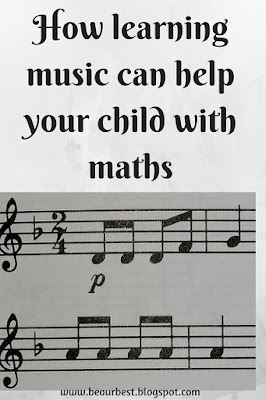 Our eldest daughter is currently learning the clarinet as part of a school music programme.   Sometimes she's keen to practise, other times not so much, but the other day she came home keen to practise saying, "This will help me be better at maths!"  . When I asked her why, she told me that the maths genius in her class at school plays the flute really well, and that music helps you learn maths.

We've all heard that learning music helps with learning maths, but does it really? and how? I decided to do a little research. Here are the areas I found that are helped through music study.


Learning rhythm and beats involve counting, so particularly for pre-school children, this helps to provide a good foundation for basic number skills.  Recognising patterns is another basic skill learnt in both music and early elementary maths.


Learning music involves learning about whole and part notes and beats I remember learning about half and quarter notes. The division of notes and sections of music is the same skill learned in maths when kids learn fractions, decimals, ratios and proportions.
There is even a curriculum in California, USA where music is being used to teach kids fractions!


Spatial awareness skills are said to increase when you learn a musical instrument thanks to the co-ordination necessary to hold and play the instrument together with reading the music.


Memory is like a muscle - the more you use it the better it gets. In learning music you are memorising things like notes, and how to play them on an instrument and also the sequences of notes needed to play tunes. Maths, particularly basic elementary maths involves learning and memorizing basic facts - like times tables.

Can just listening to music help?


This term was coined after a study carried out in 1993 where people showed an improvement in particular mathematical skills after listening to Mozarts music; which supposedly stimulates particular parts of the brain used in mathematical tasks.
Further studies question this effect and whether improvements can be made with different types of music - the effect being more on the emotions than on reasoning skills.

If you're interested, here's a fun video of some research done on the street regarding the Mozart effect!


Whether or not listening to music boosts your brain power - I think there are enough similarities in music and maths studies that my daughter is probably right in saying that practising her clarinet more will help her be better at maths - just simply because she is practising a lot of the same skills.  Definitely something to be encouraged!

Do you or your kids play a musical instrument?  Do you believe that this can help with maths studies?