What my 8 year old has taught me about goal setting 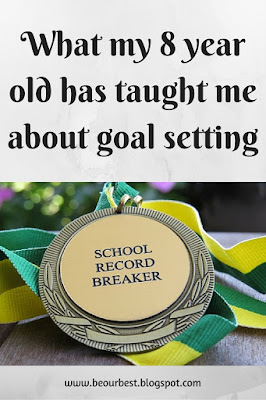 Yesterday was our girls' school swim carnival.  Both our girls love swimming and swim competitively outside of school.
This was the first year our youngest daughter was competing in the school carnival, having watched her older sister compete and win medals for the past two years.

Our youngest is very driven, particularly in wanting to do what her older sister can do (as most younger siblings are.)

So, a year ago, she set herself goals for her first swim carnival. She wanted to win her age group and also break all of the school records.  (she's not one to do anything half-heartedly!!)

What is amazing is that yesterday she did just that - won overall for the 8 year olds and broke all the records too.


Now every parent loves to see their kid win medals and ribbons, and yes I am very proud of her; but for me, it was the achievement of her goals that was so impressive.

I set myself goals and work towards them, but realised yesterday that my success with this does not compare to my 8 year old daughters. So what can I learn from her?

I know that goals should be SMART, that is

Specific - definitely, she stated exactly what she wanted to achieve.
Measurable - for sure - she gave times she wanted to achieve (the school records), looked at her current times, and could measure her progress throughout the year as her times improved.
Attainable - Yes, the times she wanted to beat were not ridiculously fast or out of reach, they were times achieved by other girls of the same age.
Realistic - again, yes, she trains hard was certainly capable of working towards and achieving her goals, if she stayed focused
Timely - yes, she had a specific completion date in mind and plenty of time to prepare.

Not only were her goals smart, more importantly she believed in herself - which is vital. I look at the things I have achieved in life - and without exception they are things that I simply decided I was going to do and never once doubted I would get there.
Our daughter also consistently worked on these goals for a year, she had them written down and pinned above her desk, trained hard and swam in several races over the year where she could test herself and her times out.  Amazing focus for a 7 then 8 year old.

I know I try to make my own goals like this, and have the same focus and self-belief, but have not always had the same success in achieving those goals as my 8 year old did here.

So - I'm now going to set my new goals, and ask myself if they are as clear as my daughter's were, and then I shall stick to them and focus on them with the same level of determination and self belief as she did.

If I can replicate my daughter's drive and commitment, then I should be able to reach my goals like never before!

Do you set goals like this for yourself? Do your kids?
What have your kids taught you?