Why is it so important that our kids fail? 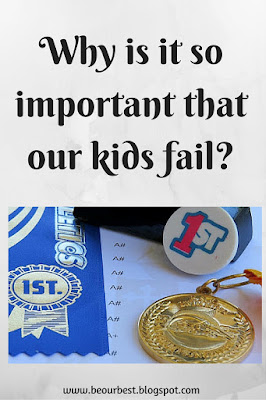 As parents we are forever being told that we shouldn't be push our kids, nor should we reward them for their successes and that by filling their lives with after school activities that we are pressuring them and setting them up for failure as adults.

My first question is - why do we want our kids to 'accept failure'.

What parent would say to their kid, "Sorry Johnny, you just have to accept - you're a failure."

Those parents who 'push' their kids, are teaching them not to accept failure, but to strive for success.

The kid who is the one achieving top marks in school, who plays the violin and is captain of the the soccer team; do you think these things simply 'happened' to them - or their parents made them happen? Of course not - they happened because the kid worked hard - studied hard, practised hard and trained hard. Have they ever experienced failure? Of course they have - that's part of learning. They've gone through the endless hours practising a musical instrument until it sounds tuneful; the weeks of repetition of exercises to perfect a sporting skill, and hours of maths practice sheets. Nobody just picks up an instrument  or takes up a sport and is instantly an expert. It takes years of practise - of getting it wrong, failing, and learning how to correct and improve in order to get it right.  These kids have learned resilience, persistence and the rewards of those attributes in their academic results not to mention their considerable musical and sporting abilities.

Perhaps their parents pushed them to study or practise but sometimes kids need to be pushed to achieve their potential - to enable them to see the rewards of hard work and study. Surely our role as parents is to encourage, guide and help our children grow into mature and capable adults with the skills necessary to lead the life they want to live. Given the choice - how many kids would spend every day after school, and every weekend playing computer games or watching TV?

The aforementioned article also states that,

"Some of the country’s top girls’ school have already begun

These 'measures' include one school introducing a test where it is impossible to score 100%. Why should this be helpful to anyone.  To set an impossible task doesn't give the student the incentive to put in 100% effort.

To me it seems like the issue is not whether the kids can cope with failure, but that schools and teachers cannot accept that some kids strive for success, work hard and are high achievers.  Just because a child is achieving, it is now seen as a result of pushy parents. It's as if kids couldn't and shouldn't want this for themselves.


The constant 'labelling' of parents as helicopter, snow-plow, bulldozer or whatever, gives no credit at all to the children themselves.  If a child is doing several after school activities, then of course it's because their parents are pushing them into it. It is assumed that no child could possibly want to do several after school organised activities.


We are told to 'let our kids be kids', to stop all these organised after school activities and just let them play with their friends and grow and develop those natural life skills that people did a generation or two ago when they learned independence and resilience from building dens in the woods, and riding round on bikes all weekend with their friends.


The reality is that kids want to play sports with their friends, they want to learn to play musical instruments, and believe it or not - kids want to be good and things, to succeed, get top marks and win races.


Yes, there will always be parents who push their kids to do things they don't want to do, and equally there will be kids whose parents don't care what their kids do and never show any interest in them. There will also be kids who spend all their free time watching television or playing on computer games.


So even for those parents who do push their unwilling kids to get active and learn skills, it's a lot better than many of the other options open to kids these days.

Personally I never really enjoyed doing the extra Maths and English work at home on a Sunday evening that my parents made me do, but I did enjoy being at the top of the class at school, and understanding what we were learning in the lessons. Once I reached high school and was too old to let my parents tell me what to do, I understood the results gained from hard work and study and could apply these myself.


Later in the Telegraph article, it states that,


"Helen Fraser, the chief executive of the Girls' Day School

Trust, of which both Wimbledon and Oxford High School are

a part, has previously explained that they try to teach failure

so that the pupils understand that "being perfect is the

If people really believe that high achieving students think that they are perfect and don't want to learn, then they are missing the point. The whole reason that these students are high achievers is because they are good at learning, otherwise they would not be at the top.

In Australia, there is a phrase called "The Tall Poppy Syndrome." In Japan, there is a proverb that states, "The nail that sticks up gets hammered down."  Both explain the idea that everyone should be equal, and nobody is 'better' than their peers.


The fact is that we are not all equal and if someone chooses to work or study hard, then that should be rewarded and encouraged not criticised.  What kind of education do we want our kids to have. Don't we want them to grow up to be strong, independent and hard working, always striving for more?  Isn't that how civilisation has grown and progressed over the centuries?  Let's not stop progress now.

Stop worrying that some kids don't know what failure is because they are achieving success. It's time that schools and education authorities stopped trying to bring down the high achievers and concentrated more on bringing up those kids who are not achieving well.