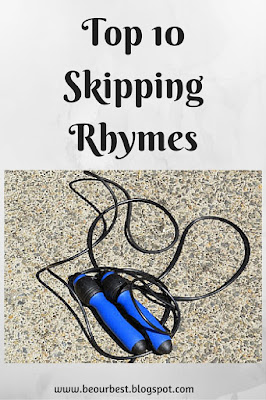 Our girls love to skip, as did I at their age, and thanks to a new workout programme I'm now following, my skipping fitness is coming back and I'm enjoying it once again too!

I thought it would be fun to find some skipping rhymes to use with the girls - I remembered bits from my childhood, but had to look up more! We have a large rope that we tie one end to the fence then one of us turns the other end so we can skip two at a time which is fun!


Some of the rhymes require running in and out of the rope - and actions too!

1. Cinderella
Dressed in Yella,
went to meet her handsome fella.
On the way her undies busted.
How many people were disgusted?
1,2,3,4......

3. Two little dickie birds sitting on the wall,
(Two players jump in)
One named Peter, one named Paul.
(each player waves at their name)
Fly away Peter, fly away Paul.
(the player exits the rope as name is called)
Don't you come back 'till your birthday's called.
January, February, March......December.
(player returns when their month is called)
Now fly away, fly away, fly away all.
(players both exit the rope)

8. Bluebells, cockleshells, eevy, ivy OVER
(jumper jumps over the swaying rope and then on OVER the rope starts to swing over to start skipping)

9. Benjamin Franklin went to France
To teach the ladies how to dance
First the heel, then the toe,
Spin around and out you go!


Do you remember any of these rhymes? What about any others?  Please do add more in the comments!