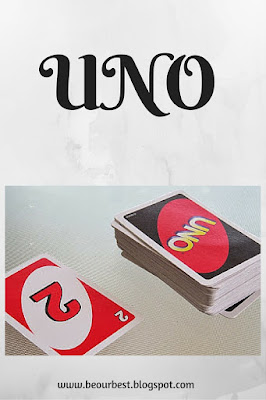 At the weekend, our daughters taught me how to play Uno.

It's a nice simple game for 2 or more players. The aim of the game is to use up all of your cards before anyone else. You can put cards down (when it's your turn) that are the same colour or number as the face up card on the table. There are also cards to miss a turn, change the colour, reverse the direction of play, and pick up 2 or four cards for the next person.


It's more or less the same as a game we play with a regular deck of cards. We call that game 'Funny Switch', and different cards have different properties, for example a Jack means miss a turn and a Queen is pick up two cards.

An uno deck has more than the regular 52 card deck, and is brighter and more colourful and so simpler for younger kids to recognise the cards and their meaning.

There are now apps to get Uno for your phone or tablet, and also different versions of the game - themed packs, and even Uno blast, where cards aren't dealt, they're blasted out of a plastic machine!!


Clever marketing I guess, but maybe I'm just old fashioned as I prefer the plain old deck of cards version! 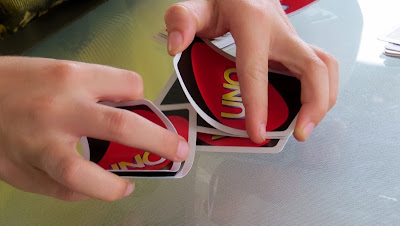 a 'riffle shuffle' to mix the cards up. My dad taught me as a kid, and it's a cool thing to be able to do!  She picked up the idea pretty quickly, but needs lots of practice! Great for working those fine motor skills!

Have you played Uno? Do you like it? Do you have any of the alternate fancy versions?