Toys R Us vs Nature 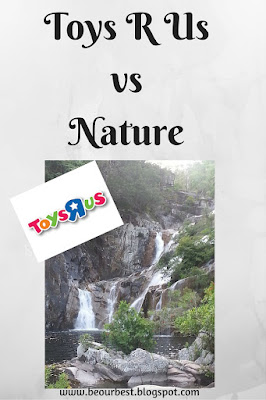 Yesterday I saw a commercial for Toys R Us that shocked me.  The ad was filmed over 3 days, during which the toy store company took 200 kids from various charities in New York on a supposed nature field trip.  The surprise for the kids was, that twenty minutes into the bus ride, they were told they weren't going to the forest, instead they were going to Toys R Us and could pick any toy they wanted.

While the toy company is charitably giving toys to underprivileged kids, the way that this has been done and portrayed in the advert sends a really bad message out to kids - showing a nature trip to be 'boring' but a trip to the toy store as a far better and more fun option.


I think if the advert had just shown the kids being given the toys I would have had a more positive impression of Toys R Us, seeing them giving something back to the community.


However, they have tried to show how exciting their store is, and how it is the place to find magic and make kids smile
by contrasting it with something that kids find boring and not fun.
To have chosen a nature field trip as this 'boring contrast' is just plain shocking.  Surely we are all aware of the need for kids to get active, have some fresh air and outdoor play.

The comments on the Toys R Us Facebook page link to this advert show other people's reactions. 160 comments so far, mostly from people who are disgusted with the way Toys R Us have chosen to portray their store in this advert.


The senior vice-president of marketing at Toys R Us in America said, "we wanted our new marketing campaign to cause viewers to pause and be reminded of the true joy that lies at the centre of gift giving." (source).

This made me think of Giving Trees where donations are asked for to give underprivileged kids some toys for Christmas.  There are times when only 'new' toys will be accepted for these Giving Trees.


My kids are certainly not underprivileged, but I have often bought them gifts of toys or books from charity shops.  Why is it seen as a necessity that every child should have fancy new toys?

I think it's really sad that our society focuses on toys and material goods as something that constitutes a privilege for children.  This weekend in our Sunday newspaper, I read an article about a family who had decided that had too much 'stuff' and this year (2013) are trying not to buy anything new.   One thing she found immediately was that when she cleared away a lot of her kids toys, this was one of the best things she could have done. Instead of her spending endless time clearing up the mess of toys and putting them away (haven't we all felt like that as parents). Her kids didn't miss their piles of toys, and in fact played for longer and with more creativity and imagination without so many toys.


I realise that Toys R Us are a company that sells toys, and they are hardly likely to tell kids that they don't need toys to have a fun time, that they can have just as much fun playing with their friends outside with no toys at all.  However, I think they should be a little more responsible in how they try to sell their toys.  Showing a nature trip as being boring and uncool is not very responsible in my mind.


What do you you think?  Go and watch the advert and see for yourself, it's only 1 minute long.