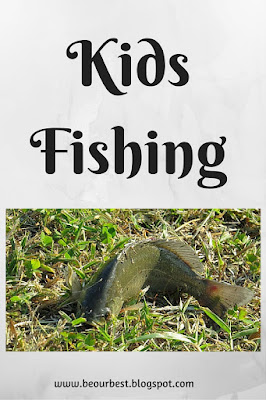 After a few years of thought and another few of growing up and getting taller and more mature, we took the punt.

I enjoyed fly fishing for trout as a kid back in Scotland, and have fond members of early morning starts and driving up to a dam. We waited patiently for a bite.

In contrast, here in Cairns, people usually go out to sea fishing or head up to lake Tinaroo in the Tablelands for Barramundi fishing.  We heard of Tarzali Lakes and thought we could camp and try our luck fishing.  A great chance to share the love of fishing with the girls.

When we arrived it was a very hot, 30 degree plus afternoon but still people were fishing.  I thought it was odd to be fishing in the middle of the day but, who knows?  We were greeted by the owner and founder of Tarzali lakes, Peter who was friendly and fun.  He asked us if we knew what we were doing and I kinda bluffed my way through. The theory is fine, the knots another!  Peter asked us if we thought we could beat the record of 16 fish caught in one session?  Crazy I thought, I remember as a kid, sitting for hours waiting for a bite.

Then I realised just how stocked the lake was.  Jade Perch was the fish and the pool was teeming with them!  When we started fishing, I realised this would be a fun and great experience for the girls, and they would certainly be catching fish.

Once we got set up and threw some burley in, the fish were chomping it.  We were ready to go and after getting the routine sorted, bait on, up to the bank, hold the line, flip the spinner, cast out, flip the spinner back and reel in.  Within a second or two, either you had a bite or you lost the bait!!

When the perch struck, you usually kept it on the line, it would fight a little and then quit, the girls could land them fine.  The look on the girls faces as each of them when they caught their first fish was priceless.  Shock, exuberation and excitement as well as the thrill of the fight all kicked in.  The girls just kept reeling them in.
Their faces were a picture when they caught one and they went from no knowledge into great little fisher girls in no time.  It was all catch and release so as long as the hooks could effortlessly be removed from the mouths of the fish, all was good.
Easier said than done.

Between Jill and I we unhooked about 40 or 50 of the fish over the two days.  We all got an understanding on how important it is not to hurt the fish and we learned how to take the hook out of the mouth without hurting the fish.  Some of the fish were caught nicely through the mouth, others were hooked in all sorts of places, and it was an effort to quickly remove the hook and return them to the pond.

We caught so many, my hands were raw with moving hooks, and the girls had definitely got the fishing bug.
In retrospect, I need to thank my dad for getting me in the fishing game and unhooking my fish!
It was not my memory of fishing with the hour long waits for a bite, this was all action!

Going home with some smoked fish was an unexpected bonus and a great thank you has to go out to Peter, Dylan and the Tarzali Lakes team.