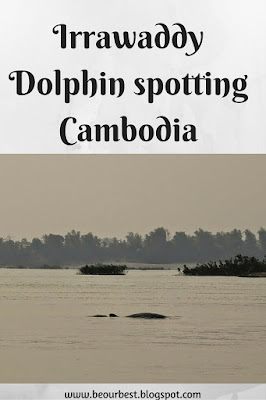 One of the countries we visited on our recent trip Backpacking in Asia was Cambodia.

When we were looking at what to do with our short time (just one week) in Cambodia, we knew we wanted to go to see Angkor Wat and we were also quite sure we didn’t want to go to the big city of Phnom Penh.
As soon as we found out there was a chance to see the critically endangered Irrawaddy dolphin on the Mekong river it was just a case of finding out how easy or difficult it would be to do and then putting up with the consequences.
Little did we know what an amazing experience was awaiting us at the end of our journey to Kratie.

Siem Reap - first stop in Cambodia
After arriving in Siem Reap we were a little surprised at just how busy, western and touristy it is. The later contrast with Kratie was stark.  After enjoying the initial impression of food in Siem Reap and the proximity to Angkor Wat, we were eager to get to the small travel agent to look at transport availability to get to Kratie.  After realising that a minivan was almost the same price (within $4) and 4 hours faster than the bus, we opted for this.

The next day our tuk-tuk driver arrived on time to take us out to the bus station where the fun started.  After transferring to the ‘bus station’, our 12 seater was beginning to look full.  Then the door opened and two predatory looking guys peered in, eyeing up us and the girls.  Two ladies then got on the bus and it was apparent they were just sizing us all up for size- literally.  Jill ended up with the backless chair and the other two women had a full on, high decibel argument across everyone as they worked out which of them was sitting where.  After a couple of double backs and a weird chicken stop, we put in some serious kilometres.  The pick ups continued and we finally ended up with 16 people in our 12 seater and a mum and toddler strapped to the back- outside- of the bus, basically on the roof rack.  We could see their toes gripping on, especially when we screeched to a halt or on an interestingly close, horn beeping episode of ‘chicken’ with an oncoming similar sized vehicle.
Generally the trip was safe once you let go of Western road expectations and went with the unwritten Cambodian rules.  The system worked, don’t knock it!   Most of the way was on sealed roads but there were a number of road works going on where the road dissolved to dust and corrugations. 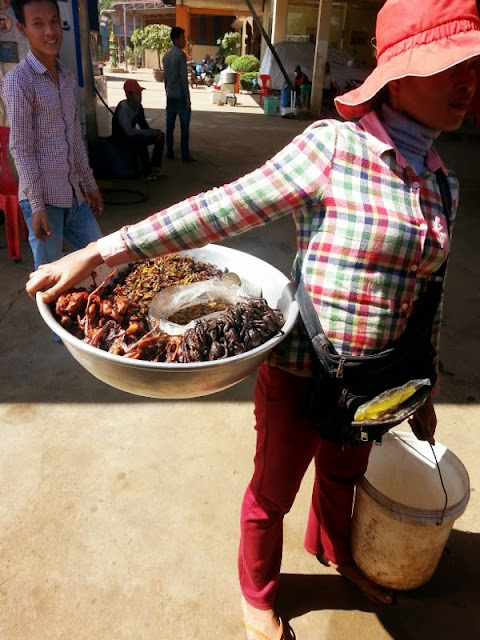 At a petrol stop we met the spider lady.  Through the window of our bus we were offered mango, snails chillified in shells, the odd cricket or non-descript black insect and then the spiders.  Big spiders, tarantulas which as you can see from the picture were beautifully displayed.  I had to do it and splashed out 50 cents- probably triple the usual cost for a particularly tasty looking one. 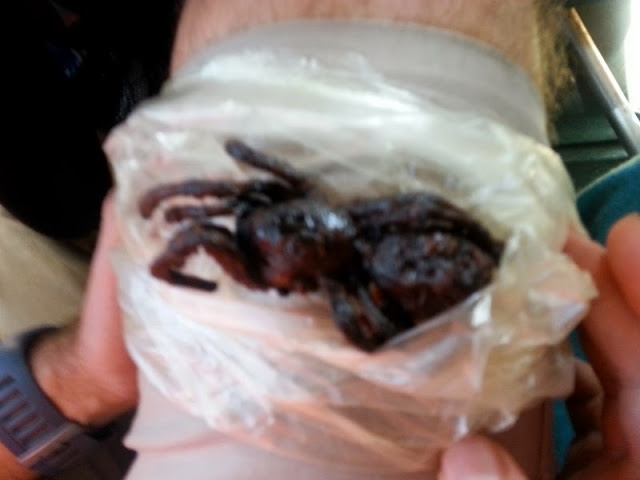 It was quite a spectacle with another local passenger buying a few for his family too.  We were then back on the road and after I tried a leg, all the girls did likewise.  After months of goading and them blowing hot and cold on the idea, when it came to ‘crunch!’ time- they followed through.  I then had to put my 50c money where my mouth had been and bit in. 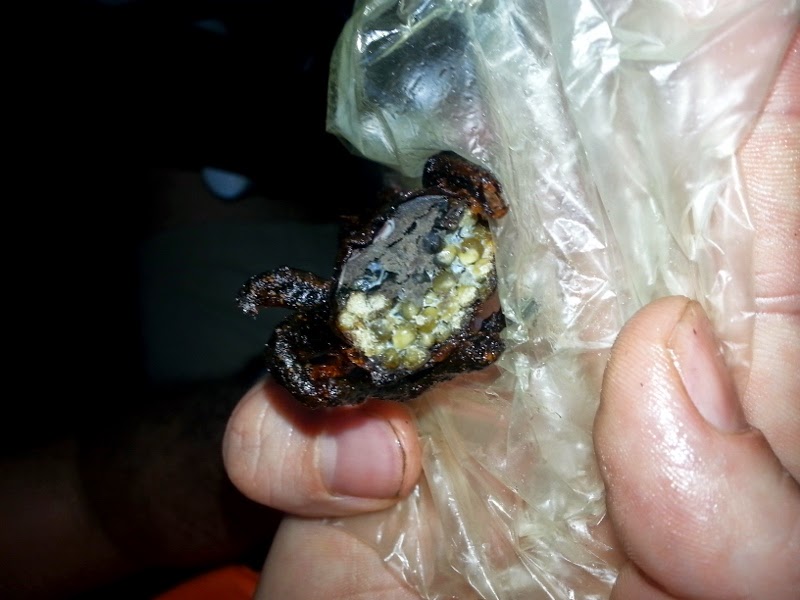 The texture and look was far worse than the taste.  Putting a spider in your mouth by choice and biting down on grey egg like and brownish flesh was not something that came naturally to me.  In saying that, the marinade it had been grilled in was quite sweet and tasty; I likened it to the sweet plum sauce you sometimes get with Chinese take away.  The spider stayed down and our trip continued.

The Mighty Mekong and Kratie
Finally, after 8 hours on the minivan, we reached the banks of the Mekong.  I honestly had no idea of it’s immense size.  It really is like a small sea at some points and the sandy shores added to this notion.  The houses on giant stilts at the banks and at the side of the road paid testament to the ability of the river to rise in wet season months. 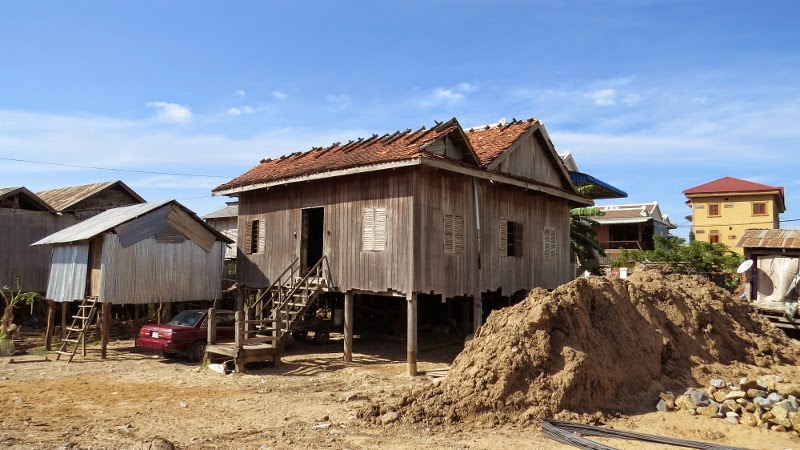 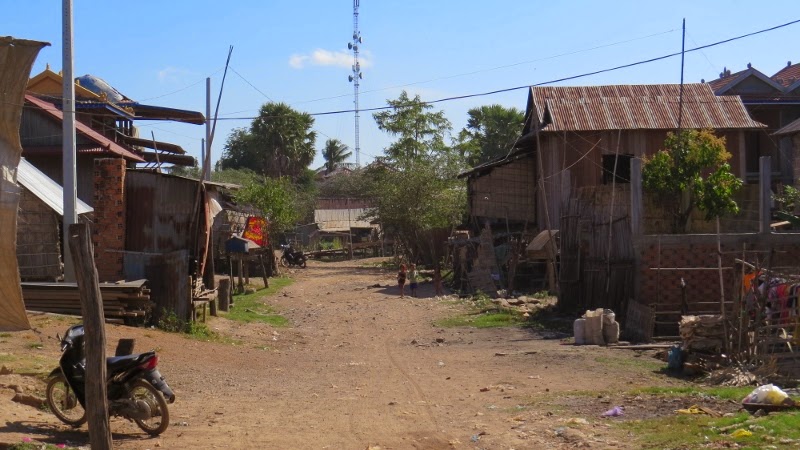 The primitiveness of the ramshackle house/huts was also confronting.  The opulence showed by the odd ornate metal railing and also random satellite dish were also an interesting insight to the lives being lived as we passed.  We reached Kratie and were immediately captivated.

The town is next to the Mekong, opposite one of the most beautiful sunsets you can imagine. 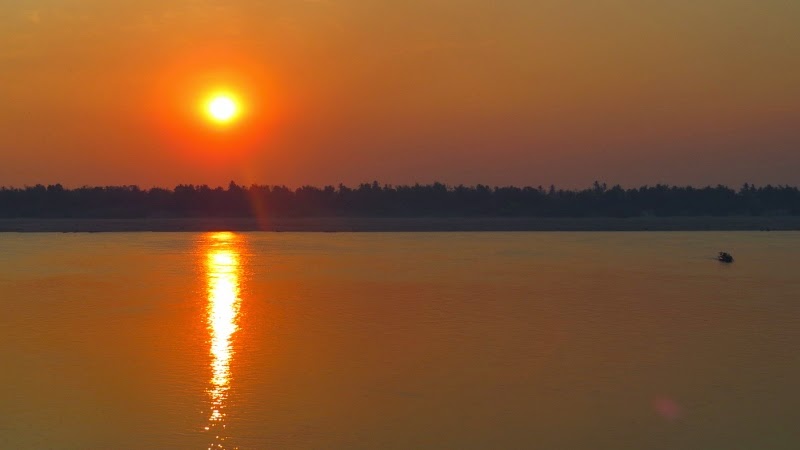 The little town, a covered market square surrounded by a small network of streets was both unique and in many ways untouched.  There were a couple of cafes that catered for backpackers- equipped with great wifi which was a welcome surprise, but basically not a place where many Western families dropped by. 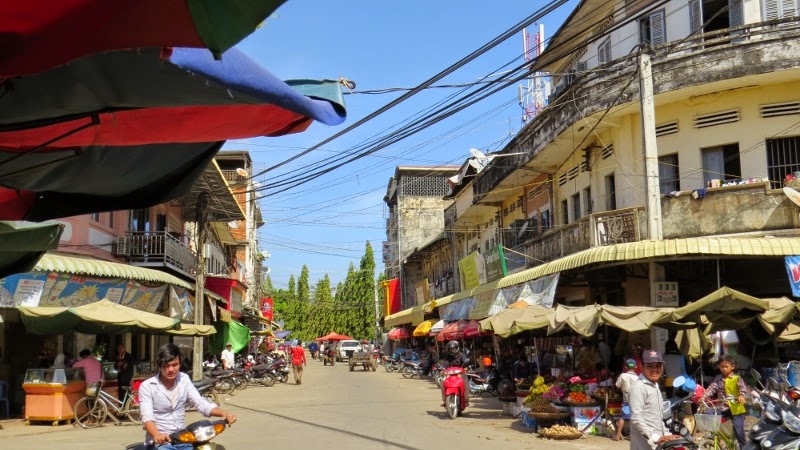 Some of the jaw dropping stares at the girls from elderly men and women were priceless.  They just stopped and stared, not in a scary way, just in awe at something obviously novel.  People were friendly and our guest house was great, crazy musical driver and all.

Phnom Sombok Temple
Our trip to see the dolphins was finally upon us.  After a rendezvous with our tuk tuk driver- with natural air conditioning (or no sides) we were off.  About half way to the 15 km destination we stopped at an amazing local temple and climbed up Sombuk hill. 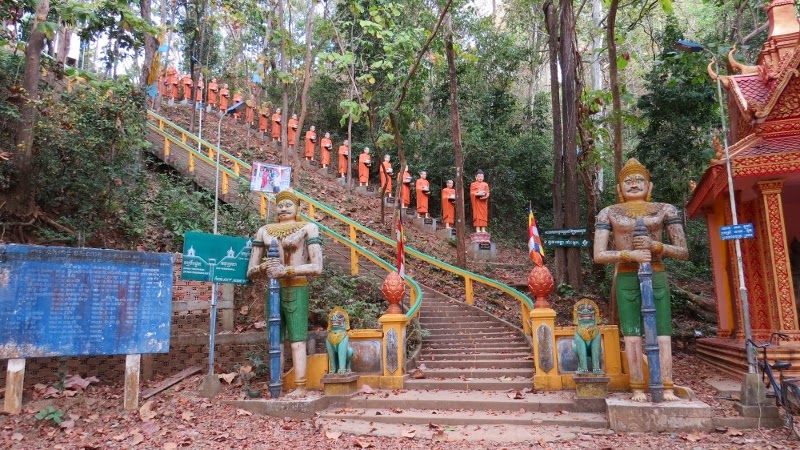 There were no monks there when we climbed but we followed the directions and helped them by carrying a paving stone each up the staircase to aid in their building project! 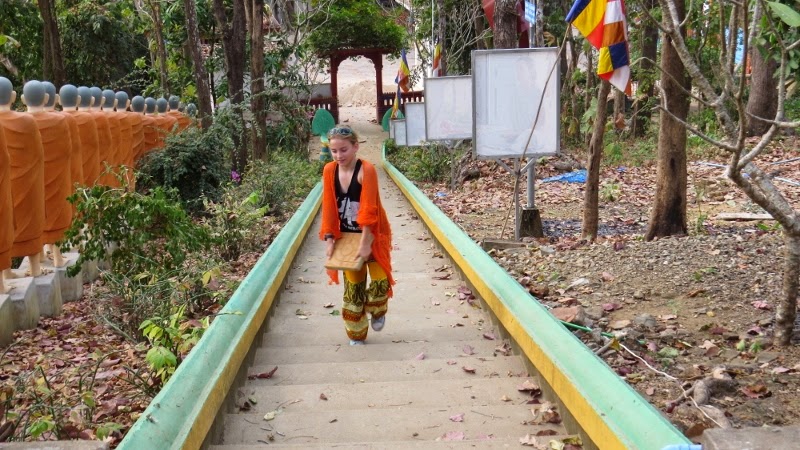 After this we continued the drive, late afternoon, to the car park next to the Mekong at the dolphin spotting location.  The little stalls by the car park showed the promise of future tourism growth and the reasonable prices and amazing local wood craft was amazing to see.

Pink Irrawaddy Dolphins
We paid our entry fee and headed through the makeshift gateway and soon found our boatman- a real old man of the river, barefoot, knowledgeable and friendly. 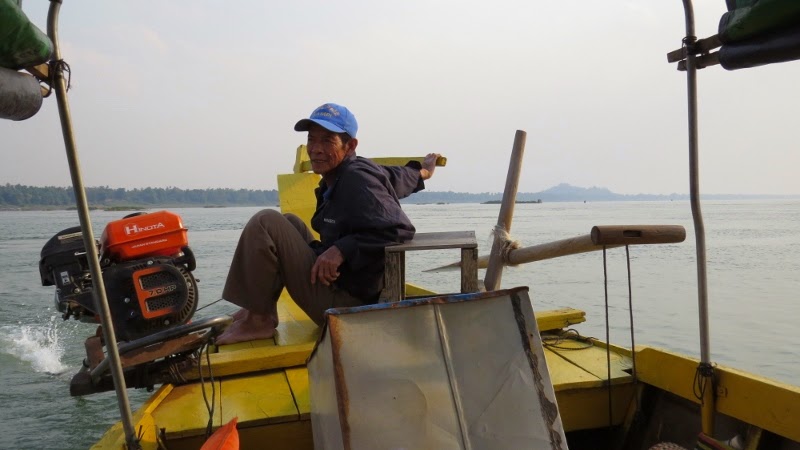 The Mekong was flat and calm and we arrived before the 5 or 6 other boats picked up their passengers.  The boat was only for the four of us and for the hour we spent cruising around after dolphins it was comfortable and unhurried.  We were expecting a fishing like experience with long waits and the possibility of finishing empty handed.  The rare Irrawaddy pink river dolphin is after all one of the rarest wild creatures in the world, only a handful remain.

However, after four or five minutes the first one surfaced near us.  It was so exciting seeing these rare creatures.  It surfaced and cruised along ducking and diving giving ample photo opportunities. 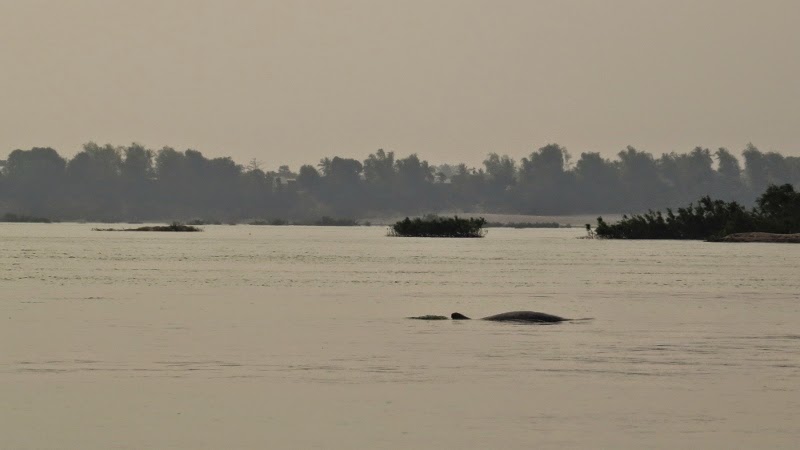 We could not have asked for more.  In the following forty five minutes we would easily have seen twenty dolphins, each one multiple times.  They were unworried by the boats and just going about their business.  They are obviously territorial and it is not a fluke to find them in this place.  Sunset and sunrise trips to this place on the river basically guarantee sightings.  The dolphins are sleek, short nosed and cute.  You can get within a few metres of them on the boat and capturing photos is challenging with the unexpectedness of their surfacing but an achievable challenge once the initial excitement of seeing a dolphin has passed. 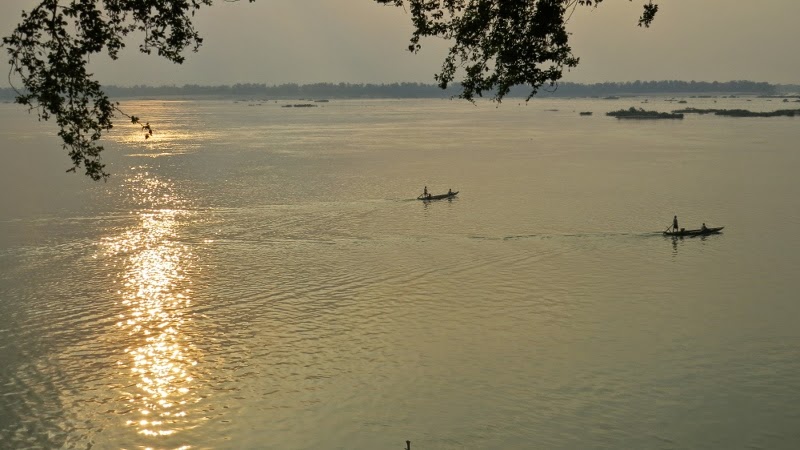 We truly enjoyed our up close experience with the dolphins and despite the endless but eventful bus trip to get there would recommend this experience to anyone heading to Cambodia.