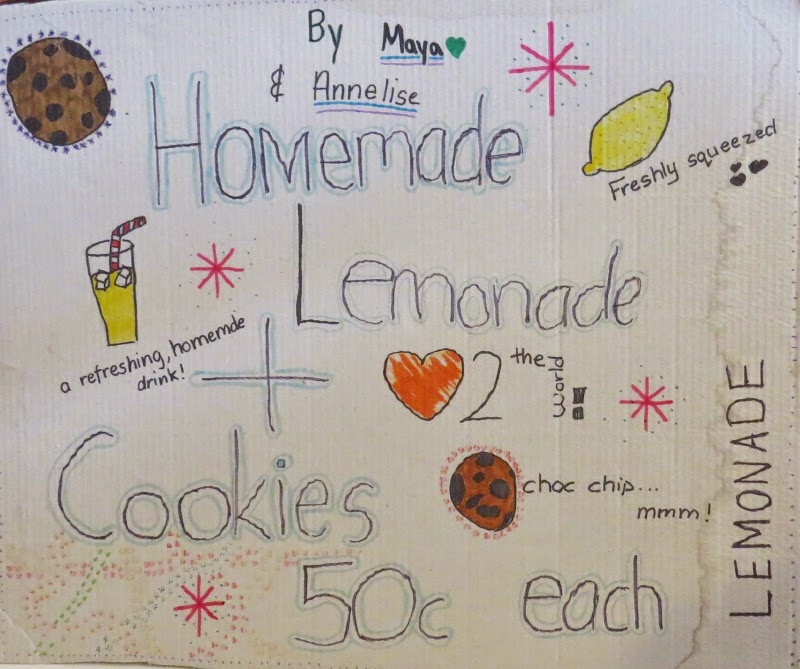 Last year we had a garage sale at our house, and our girls decided to make and sell some lemonade and cookies too. They had great fun making the lemonade, cookies and the sign; and planning the whole thing. They worked out the cost of the ingredients and made a little bit of money, but saw how much effort and time went into the whole thing and the relatively small profit that resulted.

However, they are both still keen to make and sell something. As a start, they have their own on-line Junior Madeit shop
(Little Lightbulbs) selling upcycled jeans inspirational bag tags. 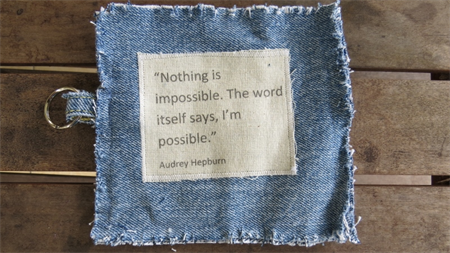 They've sold a few, but as yet haven't really pushed and put a lot of time into their small 'business'.
We're trying to find ways to help and encourage them in their endeavours, and the following story was a good place to start.

Make a Stand Lemon Aid
Last year I heard about the organisation, 'Make a Stand' when I saw a trailer for a documentary movie about the little girl who decided to sell lemonade to end slavery.  At the age of 8, she saw a picture (initially seen by her parents in a gallery) of 2 little boys with slabs of rock tied to their backs.
(to see the picture go here).


With her parents help she did this, and in less than a year reached her goal of $100,000 raised.  How did she raise this huge amount of money just by selling lemonade?  Well, she got noticed by the right people, had the support and help of her parents, and she was dedicated to her cause and set up her stall every single day.
To read more of the whole story and see how far this little girl has come since then, you can visit her website - here.

One thing that really interested me about this story, was what it was that motivated this little girl to take this cause on and be so focussed and determined to help others?

When, as a parent, you are telling your kids to stop fighting over things and hearing the cries of "It's not fair!  That's mine!  She took my...  They got more than me.",  how does an 8 year old see things so differently, and want to devote all of her time and energy into helping others?
Is this something instilled in her by her parents?
Had she ever done anything like this before?
Is she just a particularly caring and giving child?
What tipped the scales for her?
Was it the image itself, or perhaps the way her parents told her about it?


I think it's truly amazing what this little girl has done and is still doing and I'm looking forward to seeing the documentary movie.

A different kind of motivation

When our girls heard this story, it did inspire them to want to raise money to help a cause too.
For them, they both love animals, and like the idea of raising funds to sponsor an endangered animal through the WWF. This is something I myself do through sales of my own e-book, so the girls can see an example of it working too.
I think they find this a better incentive than just selling things to simply make money for themselves. There is more of a why - a clear focus and reason for selling things and making money.

and ways to promote their shop and make some regular sales to be able to support their own cause, and sponsor an endangered animal.
I think having a cause will give them more motivation and more of a reason to put some more time and thought into their little 'business' .

Making and selling things is such a great thing for kids to do and learn through and we shall encourage and help wherever we can.


Have your kids ever taken a stand against anything? Or set up their own shop or stall selling their creations? Any stories, tips or ideas would be very much appreciated!