Balloon Car Racer - a kit and a DIY! 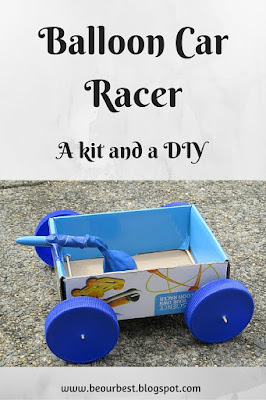 A few days ago, our elder daughter made a solar helicopter from a kit she received for Christmas. Yesterday was our younger daughter's turn to try her Christmas kit - a Balloon Car Racer. 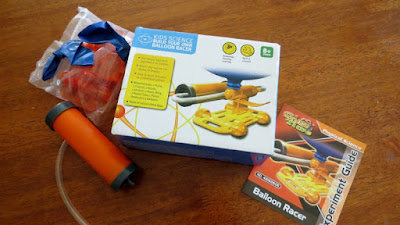 It was fairly simple to construct using the instruction booklet - just a few plastic pieces to fit together, and the balloon on top.
Pump up the balloon with the pump provided and let it go! 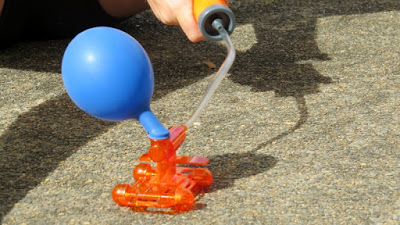 It worked really well, as you can see on this short video clip.

Since this car was such a simple concept, my daughter decided to see if she could make one herself.

She used the box that the kit came in for the body of the car. For the axles and wheels she tried wooden kebab sticks and buttons first of all. 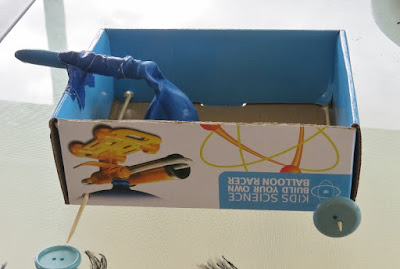 The car did move, but as the holes in the buttons aren't in the centre of each button, the car kind of bounced up and down and the force of the air from the balloon wasn't strong enough to move the car in this bouncing motion.

The balloon was attached to the end of an old ballpoint pen casing, taped to the box with duct tape. 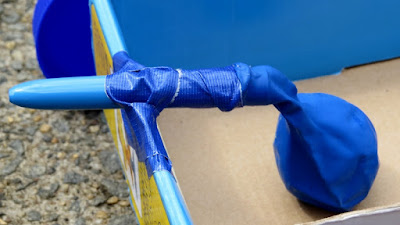 Cardboard circle wheels were tried next, but worked no better - then we thought of plastic lids.  They were easy to punch holes in the centre to push the kebab sticks through and were much sturdier than the previous 'wheels'.
Finally, the new DIY balloon racer worked!


The excitement we both felt when the car actually moved after blowing up the balloon was brilliant! Such a sense of satisfaction having constructed the car from scratch - and far better than simply constructing a pre-prepared kit!

My daughter then tried putting things in the box car to see what it could hold, but it's not strong enough to move when carrying anything of noticeable weight.

This has piqued an interest in my daughter though - and next we're going to try a different way to propel her newly built car and how to make it stronger.

Have you ever made your own model car?
Do you have any tips or suggestions for us?