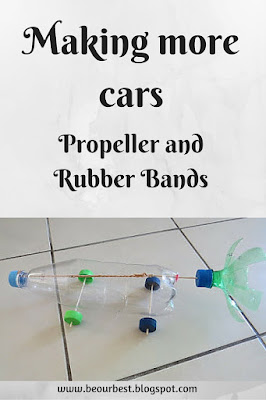 After our younger daughter's success last week making her own Balloon Car Racer, we decided to try making some more different cars powered by other means.

The first we tried was a plastic bottle propeller car, made following this video. Our daughter made it herself, figuring out the best way to punch holes and cut the various materials. 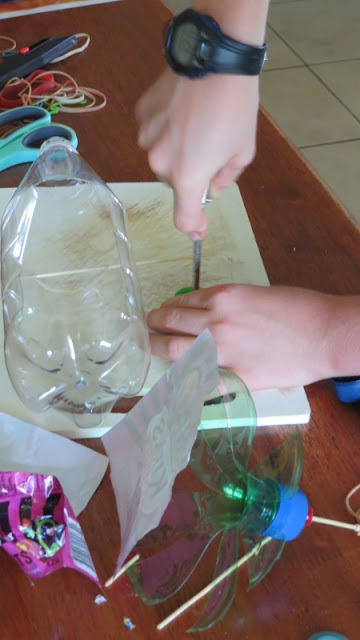 Here it is all finished - looking good! 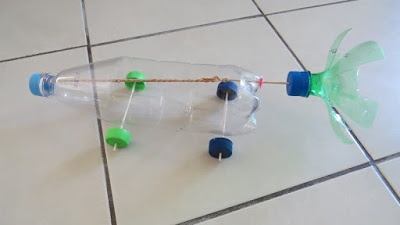 Unfortunately when we wound up the propeller, the car didn't race forward as we'd hoped!


We asked for help on Facebook, and were given plenty of suggestions like adding weight, cutting more holes and rubber bands on the wheels.  We tried a lot of the suggestions and persisted for a long time until the rubber bands snapped and we put it aside for the day, frustrated!

A couple of days later, we decided to try again with another rubber band powered car.
We found a great YouTube channel called 'GrandadIsAnOldMan' and watched several of his videos for inspiration and ideas.

First - and now I'm going to stop writing 'we' as our daughter well and truly made these ones by herself!
She made a cereal box car with rubber bands that wound around the back axle to power it. The wheels were milk bottle tops and the axles were kebab sticks.  This car worked but only ran slowly and couldn't carry any weight inside it.

Next she tried with larger mayonnaise jar lids for wheels - and rubber bands around them to gain traction on the tiled floor. This worked much better! The car was faster, but unfortunately still couldn't carry any weight!


Finally, she tried a flat bed car just made with cardboard, drinking straws to push the kebab stick axles through and CDs for wheels.  This worked REALLY well and was strong enough to carry a small tuna can!  Success!!

The cars our daughter made over the past week have provided lots of fun, entertainment and learning experiences.  Seeing and sharing the joy of success when she has made something that works as expected is amazing.
She has learned some physics principles, for example kinetic and stored energy, friction and traction.
She's learned persistence and perseverance to not give in when things didn't work - instead to look at why they aren't working and how can she improve it.
She has also learnt to make things for herself from materials we had on hand in the house - enjoying this and gaining far more satisfaction than from the initial plastic car kit she started with a week ago.


But the challenge isn't complete. There is a motive for making this car and transporting a tuna can. The next step being to make it go up a slope! For that we'll be revisiting the propeller car to see if we can add more force to power the car.

I will post on the progress of this project again in a few days!

Have you ever made a small DIY car like any of these?