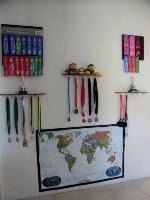 With the Olympics now on, and our girls enjoying watching sports they know and discovering new ones too, I thought it would also make a good opportunity to help them learn a little world geography!

Just before the start of the Olympics, I set up a wall in the corridor to display their growing collection of sporting medals, ribbons and trophies (which until now were being kept in bags in their room).  It's much better to have the recognition of their efforts displayed proudly rather than tucked away in a drawer.  I do believe it is very important to celebrate and reward achievements, and to use them as encouragement for further efforts.

This weekend, we were watching some of the swimming and gymnastics.  As the athletes appeared on TV, we'd look at the names of their countries and the pictures of their flags, then try to find where they were from on the world map.

To help with the flags, we dug out an old kids atlas from my childhood which has this great page on it (see picture opposite).

The only drawback with this old atlas, as with the world map jigsaw puzzle we did too, is that that country names and flags have changed somewhat since then. Most noticeably the old Soviet Union!  We did have new maps to show the girls too, so they could see how things have changed over the years!

I'm not sure at what age kids are expected to learn world geography, but at age 7 and 9, it's certainly not too easy or difficult and is holding their interest well enough!

I also found an online game - where kids are shown random country outlines and names, and they have to drag and drop the country onto the world map in the correct position. Perhaps at the end of the Olympics, I'll get our girls to try this game to see how much they can remember!

How are your kids on their knowledge of countries and flags of the world? Have you found any other opportunities like this to help them learn?

Email ThisBlogThis!Share to TwitterShare to FacebookShare to Pinterest
Labels: geography