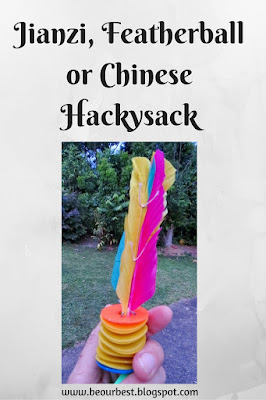 On our recent trip to Asia we found these 'shuttlecocks' in Vietnam, where they are used to play a version of Hacky Sack. We saw people using them playing in the streets, but also discovered that there is an official game played with them. The game is called "da cau" and means "kick shuttlecock". The game is similar to Badminton, played on a rectangular court divided by a net, and is in fact the national sport of Vietnam! 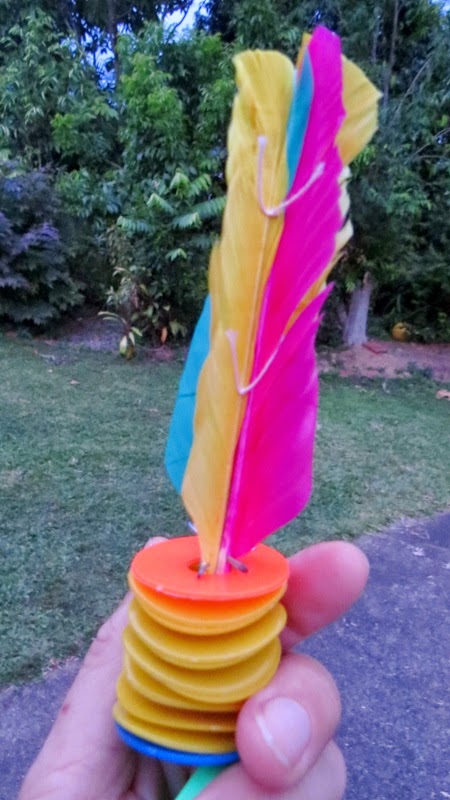 The game is believed to have originated in Vietnam in the 5th century BC, when it was used as a military training exercise.
(Source - Wikipedia)

We saw many people playing this game in the streets in Hanoi - like this:

We have been trying to play it with the featherball we bought in Vietnam, but we aren't quite this skilled yet.

It's a great way to practice and improve hand-eye and foot-eye co-ordination. It's good for your eye-muscles, agility, body control and balance.  Practising this is a great fun way to improve all sorts of physical skills that can be transferred to other sports.
Our girls both play hockey - so any practice watching and reacting to a ball of any kind should help them in that.
Euan and I both do a lot of trail running where agility is really important as you run over plenty of roots and rocks, so it should prove beneficial to us too.

Looks like we've found a new family game to play in the garden!

Have you ever played any kind of 'hacky sack'? or even the Vietnamese version?