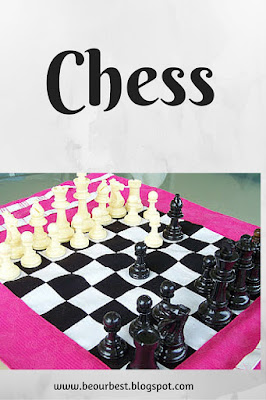 I've never been a big fan of chess.  If I'm totally honest, it probably has something to do with the fact that my older brother was better than me at it, and so I preferred other games and activities where we were better matched or I could beat him!  I know how to play, but really never do.

I was surprised when our eldest daughter came home from school a couple of years ago, when she was 6 years old,  having joined the lunch-time chess club.  She learnt fairly quickly, and has enjoyed playing since -with her Dad, and even teaching her younger sister the rules so they can now play together.

This week I made a fabric chessboard set, using some black and white checked fabric I found in a remnant box a while ago.

Spending the time on making the chess set, made me think about the game itself, and the fact that my girls enjoy playing it, but I never do, even though they do ask me to sometimes.  I've been thinking that perhaps I should take more of an interest in the game, and play with them sometimes. Both for their benefit - as a good parent taking an interest in what my kids are doing, but also for my own personal  benefit - to go back to something that I gave up for all the wrong reasons!  If either of our girls stopped doing something for the same reason, I'm sure I'd be a little disappointed!

I spent a little time researching Chess online - finding out about it's origins and why it is a good game to learn to play.

Chess is believed to have originated in India around 1500 years ago.  In the Middle Ages it was used to teach war strategy; in the 18th Century, (the Age of Enlightenment) Chess was seen as a means of self-improvement; and now, Chess is seen as an excellent means to improve the mind - improving skills of memory, logical reasoning, concentration and patterning amongst others.

You can find chess everywhere, there are giant chessboards in parks, computer games of chess, most households have a chess set in their games collections,  schools often have chess clubs, and even Harry Potter books have 'Wizard Chess'.

In 2011 the BBC reported that Armenia - (where the top players are treated like top sports stars) is making learning Chess compulsory in its schools.  I'm not sure that making it compulsory is necessary but then again, is it any more or less beneficial than some of the other subjects and things our kids learn in school?

The more I read, the more I feel like I'm missing out by not playing.  Missing out on an important part of our culture, and also a great opportunity to improve my mind and skills - not to mention an opportunity to spend some quality time with my kids doing something they enjoy!

How about you?  Do you play chess?  Do your kids?  Do you believe it's really that good for you?  And what do you think about the idea of Chess as part of the school curriculum?