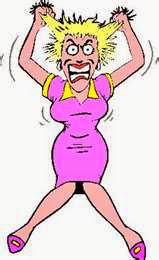 A few weeks ago I had a meltdown.

It built up gradually over a few days in the mornings getting the kids ready for school.  That time of day was filled with me hurrying the kids along, getting them to eat some breakfast, get dressed, get their bags ready, make their beds, feed the fish.... you get the idea.


Then as we're on our way out the door to the car, I'm running through the check lists for what they need for the day.... hat, bag, lunch, sports gear, clarinet...etc. etc.


School mornings have been like this for a while now, I've just accepted that this is the way it is with school kids. (Ours are aged 9 and 11) .  However, more and more often we were arriving at school only to find someone had forgotten something important for the day. A hat - without which they aren't allowed to play outside; or a swimming costume, so the after school lesson would be missed.


We just live a few minutes away from the school, and since I work from home, I can just pop home to pick up forgotten items.  This was definitely a big mistake on my part!  The more often I did this, the more often things seemed to get forgotten! Not deliberately mind you, it was just that there were no negative consequences for forgetting things, other than my own frustration!


Well, finally I reached breaking point and realised that I've been doing far too much for our girls, and although they may have needed this when they were younger, they have grown up lots and are quite capable of remembering their own things each morning without me nagging them and fetching and carrying things for them.


When the frustration got too much and the realisation hit me, I just crumbled into tears, telling the kids I'd had enough. Me trying to help them was no longer having any effect and it was time for them to step up and start doing things for themselves.


They were a bit shocked - seeing mum in tears is never a good sign. But they gave me hugs, listened to my rants and raves and agreed something had to change.

I decided that I wasn't going to remind them of ANYTHING EVER AGAIN!   Ok, so that was a bit extreme, but it was how I felt at the time!


"But what if we get to school and have forgotten to put our shoes on?" , they asked.


"Then you'll spend the day at school in your socks", I replied.

"What if we forget our lunch?"

"You won't starve for one day."


They took it all good naturedly and to be honest, they were quite excited about finally being given some responsibility.

As a family, we have chosen for me to be a stay-at-home mum to take care of our kids. But this doesn't mean I should do everything for them.  I also need to teach them to be, and yes LET them be independent.


I've always felt with our kids that it takes me a while to figure out how to be a mum with them, how to 'parent' them. Once I've got it all figured out and settle into a routine, they decide to grow up a bit and what I've been doing doesn't work any more. Then it's back to square one, figuring out how to be a mum to a kid who's a little bit older and more and more capable.


So, my tearful meltdown was then followed by a couple of school mornings which were VERY quiet - making me realise just how much of the silence I filled each day with nagging, reminders and cajoling the kids to eat, dress, etc.


Gone are the reminder notes on the door telling the kids what they should be taking to school each day.  No longer do I check their bags each day.


I've accepted that there might be times when they forget something and have to miss out on an after school activity that we may have paid for. But it's all part of learning for them....and me!


One day shortly after we started this, our youngest forgot it was a sports lesson day at school and wore her school dress. She had to run around playing soccer in her dress and school shoes rather than her much favoured shorts, top and trainers!  Lesson learned, she doesn't want that to happen again, so I think that will be one day she'll remember each week for sure!

When I had my meltdown/ realisation of how I was doing too much for my kids, I felt like I was an overprotective, mollycoddling parent who'd been doing it all wrong for who knows how long. In wanting to help my kids, I'd actually been hindering them.


Once I started talking to other mums about this, it was a big relief for me to find others who felt the same way.  You do tend to forget this at times, that there are plenty more out there going through the same thing as you - making similar mistakes, feeling rotten and blaming themselves.


So that's why I thought I'd share my meltdown on here too!


A few weeks on, I feel much better about where I'm at with my parenting skills. The girls are happily taking on more responsibilities - clearly thinking "About time Mum.", and my mornings are far less stressful now and more enjoyable for us all.


Are you a parent?  Do you ever feel like you do too much for your kids? How do you know when they're ready to break free from mum and dad and do things 'all by themselves'?


I'll share in future posts what our girls are now taking on and learning how to do 'by themselves'.  Many things they probably could have done much sooner, but at least we've made a start now.


Please do tell me your thoughts on this. I'd love to hear some other ideas and suggestions.

Email ThisBlogThis!Share to TwitterShare to FacebookShare to Pinterest
Labels: be a better parent, good parenting, parenting