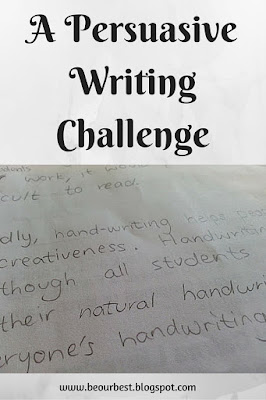 At the weekend, Euan decided to try a writing challenge with our girls - but not only for them, he did it with them too, which I think was part of the reason our girls enjoyed it so much! Our kids certainly enjoy when we play games and do things all together - even if it is writing!

He set a writing prompt, then he and the girls had 45 minutes each to write their own opinions and response to the prompt.  When they had finished, they read what they had all written together; then came my role.  Euan read out all 3 pieces ( so that I didn't know who had written each one as I would have recognised everyone's handwriting).
I had to listen, judge them and give feedback.

As it happened I guessed wrongly as to the two pieces written by our eldest daughter and Euan, which was the source of much amusement! But I was very impressed with all three answers and it provoked much discussion afterwards too, both about the topic itself and the different written responses to it.

This was a great way to get our girls practising their writing skills with no pressure of a 'test' or feeling like they were doing 'school work'.  They love challenges, particularly those where they can go up against Mum or Dad and we'll definitely be doing more of these!

So here was the chosen writing prompt for this challenge:

"Handwriting should no longer be taught in schools."

And here are the three responses
(typed up by me, just as they were handwritten, no alterations have been made!).

1.
Handwriting is a vital part of human life. People use it for communication and for spreading ideas. It has been used for centuries and has still worked to people's satisfaction.

Handwriting helps people excel in reading and spell-checking. This can help students in exams and assignments. If students were not taught handwriting, when teachers went to check their students' work it would probably be messy and difficult to read.

Secondly, handwriting helps people develop uniqueness and creativeness. Handwriting does this because even though all students are taught to write the same way, their natural handwriting will show through. That is what makes everyone's handwriting different and special.

People may argue that technology is the 'new way of the future'. This is quite likely but that might still be another decade or two away, so for now there is no need to forget about handwriting. Also, there are still many people in the world that love the art of writing and, in some cases, despise the use of technology.

When people hand-write, it shows their emotions. They might use quick , scribbly writing or careful, elegant writing. Technology is getting close and closer to taking over, but do we really want that? Handwriting is an essential part of life, which his why it should be taught in schools.

Students have the right to hand-write!

2.
Handwriting should no longer be taught in schools. I do not agree with that. Handwriting is a traditional method used for recording the past and communicating with others.

Firstly, handwriting should be taught in schools because if one day people don't have a computer to type but they do have paper and pen, they can still record stuff; whereas if they hadn't learnt handwriting they couldn't communicate or record stuff.

Secondly, it is vital that handwriting carries on being taught in schools because if it wasn't it would make it easy for students to cheat. They could just copy and paste from the internet into their writing. But with paper and pen, it is extremely hard to cheat.

Finally, handwriting must be taught is schools because if you get a virus on your device which you are writing with,  you might lose your work. But with pen and paper, it is very hard to lose your work.

3.
In recent years, as computers have become more and more part of everyday life, many people think handwriting is becoming outdated and antiquated. The ability to write and compose your thoughts and arguments is as important as ever, however, the need to write is less important as computers take over from pencils and pens. Due to the rise of computers, handwriting should no longer be taught in schools.

As soon as you join junior school you are faced with computers. The sooner you can read the sooner you can make the most of computers. When you can understand letters and recognise them it is time to learn to type. Programmes such as Dance Mat Typing and Mavis Beacon provide great ways to have fun and learn the important skill of typing to allow writing to become easier and of higher quality through the use of software on a computer.

When you create a written document on a computer using a programme such as Microsoft Word, you can instantly edit it. the frustration of having to rub out mistakes and have a messy, smudged paper is no longer an issue. Using a clean, crisp screen is the new norm. tools such as spell check and grammar check which can be used to highlight and fix corrections , save time for both the writer and classroom teacher when editing and correcting written work. We cannot 'un-invent' the computer as a tool to help writing, we should embrace it and move forward with the times.

In contrast, people say learning with pen and paper helps develop a deep understanding of letters, spelling and even a love for language, but this is perhaps a dying idea, with phones, tables, i-pads and computers taking over every part of our free time, we should not waste our precious leisure time with old ideas that take away time from fun things like swimming and hockey.

Overall, it is clear that writing is as important as ever but how we do it is changing. We do not need to waste time in school focussing on old ideas such as handwriting when computers can be our paper and 'Word' our assistant. Let's take the technological plunge, get rid of time wasting activities such as handwriting and use computer typing programmes and editing software to write as we move into the 21st century.

Can you guess which was written by a 10 year old, a 12 year old and an adult?