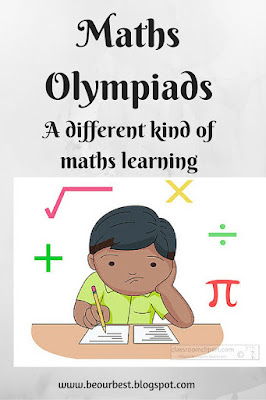 How many people think maths is fun?  My guess would be not many;  but I believe as with anything, it can be made fun. Maths is all about solving problems right from the basic up to the very complicated. If maths could seen more as doing puzzles and challenges, then perhaps it would have more appeal.

I have already written about the Japanese KenKen puzzles which work on that theory that puzzles are fun, and help kids to develop their mathematical skills that way.

Maths can be made fun through games like Yahtzee, Monopoly and Top Trumps, use of numbers in cooking, and fun challenges. I was once looking after a friend's kids and had to take them grocery shopping with us. I set the kids a challenge to keep them occupied while I concentrated on my shopping list! In pairs they had to add up how much the shopping cost in total as we went around. Whichever team was closest to the correct answer at the end won.  They loved this challenge and when their mum came to collect them they told her how much fun they'd had food shopping! Who would have thought?


The key to getting kids to like maths, is the same as anything - make it fun, make it different, make it a challenge. Learning maths methodology then doing lots of example problems to practice and drill the method is one way to learn - and I do agree it has its place. Repetition is important in maths to gain skill and to be able to do things more easily, which will in itself make maths more enjoyable  (the easier something is, the more likely you are to enjoy it). But there has to be more to maths than endless repetitive sums!

What we are doing

I started out a few months ago, setting maths problems for our daughters, with a reward in a locked box that could only be opened by the combination number of the solution to the maths problem. 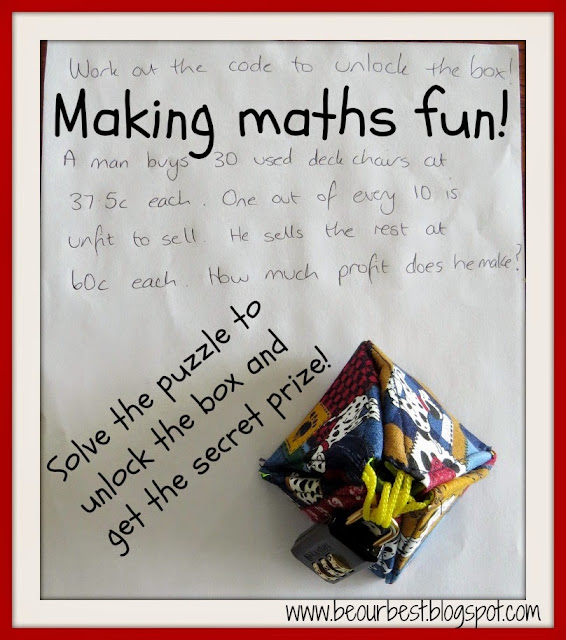 You can read about that here.
The girls enjoyed this, so it grew into a maths advent calendar for Christmas, and now I've had to add an extra box so that they have one each and it's become part of their morning routine to solve a problem and unlock their boxes.

Many of the problems I use for these boxes are from the Maths Olympiad challenge that both girls have participated in at school.

Both our daughters have participated in Maths Olympiads over the past few years at school. It's a 'competition' designed to teach major problem solving strategies and build mathematical intuition in  school kids.

The kids get practice at school in lunch times, and then over the year there are 5 Olympiad tests, each of which consists of 5 questions with around half an hour to solve them in.

The best part of this Maths Olympiads for me is the problem solving practice it gives the students. They learn to use trial and error, estimation and logic to find the answers. The questions are more than just maths problems, they are challenges and puzzles.

Yes, they do use their mathematical skills to add, subtract, multiply, divide, and make various calculations; but they also learn some nifty mathematical 'tricks' and shortcuts.

Or here's another one my younger daughter taught me:

How to know if any number is divisible by 3:
Add the individual digits and if their sum can be divided by 3, then the original number can be too.

There are other divisibility rules which can be found here.

By setting these problems each night I'm learning more myself and also enjoying the challenge of solving the puzzles!

When I found this 'viral maths problem' on the internet from last year's Singapore Maths Olympiad, I had to give it a try! It is aimed at Singaporean High School students, and is meant to be a difficult one.

Here is the problem:

Well if you can't figure it out - here's a video to explain how you get the answer:

I had to listen to this and read other explanations a few times before I really understood how to work out the answer!

Make Maths Different and Fun!
Maths as we think of it traditionally - that is 'numbers' can be found in so many aspects of our daily life from shopping and cooking, to bills and banking.  But problem solving is so much more than a maths skill. It's a life skill that will prove a valuable asset to our kids if we get them to practice and enjoy puzzles and problem solving from a young age.

We will continue to look for and take advantage of opportunities to help our kids to develop these skills - whether that be Maths Olympiads or games and puzzles.

Do you know any other ways to make learning maths fun?